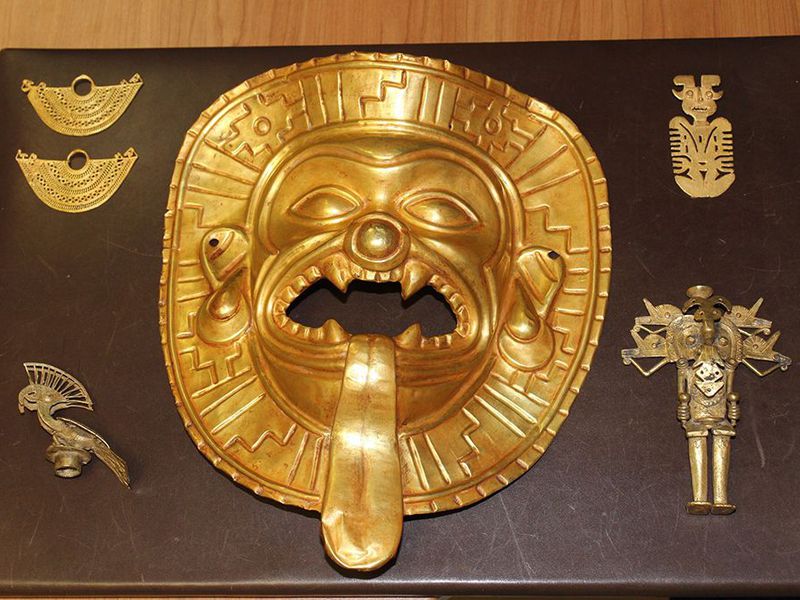 A joint operation undertaken by Interpol, Europol, the World Customs Organization and local police forces has recovered 19,000 artifacts from 103 countries, the global policing organization announced this week. Objects recovered range from a pre-Hispanic gold mask to a trove of ancient coins and Roman figurines. Authorities arrested 101 people as part of the crackdown.

The undercover operations, dubbed Athena II and Pandora IV, took place last fall. Due to “operational reasons” cited in the statement, the missions’ results were withheld until now.

Pandora IV is the latest in a series of similarly titled stings. Per the Art Newspaper’s Kabir Jhala, previous Pandora operations led to the recovery of 62,500 artifacts between 2017 and 2019. Last November, Europol separately announced the recovery of 10,000 artifacts through Operation Achei.

“The hundreds of arrests and investigations launched—and thousands of objects seized—must be a wake-up call for those in government and in the art world,” Deborah Lehr, founder of the nonprofit Antiquities Coalition, tells artnet News’ Taylor Dafoe. “This is a critical reminder, coming at an equally critical time, that when it comes to ancient art, buyers should beware.”

The joint operation targeted international networks of art and antiquities traffickers who loot objects from “war-stricken countries, … museums and archaeological sites,” according to the statement. In one instance, the Spanish National Police collaborated with the Colombian Police to recover ancient jewelry, gold figurines and a Tumaco gold mask in transit at the Madrid Barajas International Airport. Subsequent house searches in Bogota yielded 242 stolen pre-Hispanic objects.

“The number of arrests and objects show the scale and global reach of the illicit trade in cultural artifacts, where every country with a rich heritage is a potential target,” says Interpol Secretary General Jürgen Stock in the statement. “If you then take the significant amounts of money involved and the secrecy of the transactions, this also presents opportunities for money laundering and fraud as well as financing organized crime networks.”

A major component of the operation was a “cyber patrol week” organized by Italy’s Carabinieri Department for the Protection of Cultural Heritage. These “culture commandos” combine the talents of “archaeologists, paleontologists, art historians and combat-trained shock troops,” wrote Frank Viviano for National Geographic in 2015. Targeting online sales, the initiative resulted in the recovery of 8,670 artifacts earmarked for the digital black market.

“The operational success of Customs and its law enforcement partners offers tangible proof that international trafficking of cultural objects is thriving and touches upon all continents,” says Kunio Mikuriya, Secretary General of the World Customs Organization, in the statement. “In particular, we keep receiving evidence that online illicit markets are one of the major vehicles for this crime. However, online transactions always leave a trace and Customs, Police and other partners have established effective mechanisms to work together to prevent cross border illicit trade.”

Artifact trafficking is an ongoing problem in the international community. As the Art Newspaper’s Emily Sharpe reported last month, the Antiquities Trafficking and Heritage Anthropology Research Project—an investigative task force dedicated to “digging into the digital underworld of transnational trafficking, terrorism financing, and organized crime,” according to its website—noted an increase in online antiquities trafficking as many regions enacted stay-at-home measures amid the novel coronavirus pandemic. Illicit groups are now trafficicking not only coins, ceramics and other artifacts, but also personal protective equipment and hand sanitizer, according to the researchers.

“Any nation with a past worth protecting must also remain vigilant that its history is not stolen and sold to the highest bidder,” Lehr tells artnet News.

This article was originally published at the Smithsonian Magazine.