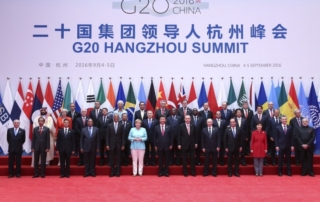 Basilinna congratulates on the G20 member countries for the bold move of including green finance as an integral part of the final Communique of their meeting in Hangzhou, China in September 2016. China launched a Study Group for green finance, co-chaired by the United Kingdom, as a pillar of its Presidency of the G20. The Study Group developed seven recommendations for member countries that they can adapt to create their own financial infrastructure for green finance.

Deborah Lehr, Chief Executive Officer of Basilinna, spoke at a high-level international conference in China with members of the study group to explore the findings. Basilinna has been involved in the green finance issues for the past two years as part of its support for the Paulson Institute.

The Paulson Institute (PI) has been supporting the efforts of the Study Group as it prepared its recommendations for the G20 Heads of State. In addition, PI has partnered with the Office of the Leading Group for Economic and Financial Affairs as a non-commercial advisor in creating the Building Energy Efficiency and Green Development Fund.

This fund will promote U.S.-China cooperation through investments in innovative U.S. technologies to help in China’s War Against Pollution.