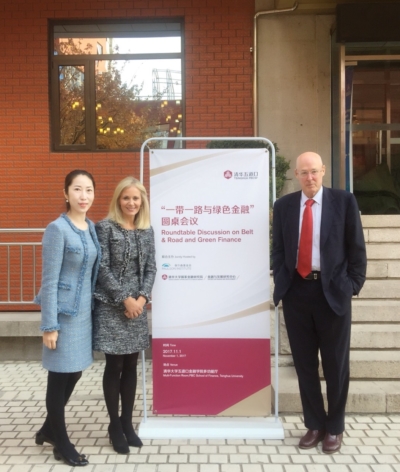 Read Xinhua's Report on the event below:

Mr. Paulson Speaks at Tsinghua on Belt & Road and Green Finance November 1, 2017 --   The Paulson Institute and the Center for Finance and Development of Tsinghua University National Institute of Financial Research co-hosted a roundtable discussion on Belt & Road and Green Finance in Beijing, which is one of a series of roundtable discussions on green finance. The roundtable was focused on how to improve the “greenness” of investment in the Belt & Road initiative, and how to mobilize international capital to invest in the Belt & Road regions.

Henry M. Paulson, Jr., Chairman of the Paulson Institute and former U.S. Secretary of the Treasury, participated in the discussion and delivered a keynote speech. The discussion was moderated by Ma Jun, Director of the Center for Finance and Development and former Chief Economist at the Research Bureau of the People's Bank of China (PBOC), and Deborah Lehr, Vice Chairman of the Paulson Institute, and attended by over 30 senior officials and financial experts from the PBOC, the Ministry of Environment Protection (MEP), the Green Finance Committee of China Society for Finance and Banking, China Development Bank, Silk Road Fund, CITIC Group Corporation, the UNEP Inquiry, the City of London, the British Embassy in China and other international financial institutions.

In his welcoming remarks, Yang Bin, Vice President of Tsinghua University, noted that, in recent years, China has led the world in the development of "Fintech" and "green finance". In the area of green finance, China is the first country to establish a "relatively complete" green finance policy system and is now the world's largest green bond market. Chinese local governments have set up dozens of green development funds and launched five pilot zones to promote green finance.

The Belt & Road initiative proposed by China will become one of the key engines of global economic, trade and investment growth in the coming decades by promoting investment in a large number of infrastructure projects in the Belt & Road region.

"It wasn’t so long ago that the idea of green investments seemed a bit impractical, if not idealistic. Today, however, investors and policymakers around the globe are recognizing that green investments are downright prudent and even essential," Mr. Paulson said. "Rather, the question is how we can design a more effective global green market infrastructure. A big part of the answer is that governments need to create conditions that encourage private green investments. Countries should adopt policies that reduce the price of low-carbon investments."

The Paulson Institute is pleased to be a part of this process. And as it has been seen in China, it is possible to address our planet’s most pressing environmental challenges while still maintaining economic growth in the Belt & Road region, it is impossible to simply rely on funding from China. In order to successfully implement the Belt & Road initiative, we must mobilize global financial resources and, in particular, the international financial centers such as Hong Kong, New York and London.

The Environmental Risk Management Initiative for China’s Overseas Investment jointly issued by the China Green Finance Committee and other six industrial associations is a starting point for promoting green investment in the Belt & Road regions. However, in the future, it is necessary to mobilize the United States, the United Kingdom and international organizations to work together for the development of guidelines on greening the Belt & Road initiative that can be accepted by global investors.

Ms. Lehr remarked that in a short space of time, China has become a global leader in green finance. It is clearly a political priority: President Xi mentioned it in his work report at the 19th CPC national congress, it was a key centerpiece of China’s presidency of the G20, and will be a part of the Belt & Road initiative.  China could become an “exporter of green finance” so it is in all of our interest that China get “it right.”

The Paulson Institute looks forward to working with Dr. Ma Jun and Tsinghua University National Institute of Financial Research as they develop recommendations and policies on green finance for financial and other institutions participating in the Belt & Road initiative.

The roundtable is the first academic event since Ma Jun's transition as Director of the newly established Finance and Development Research Center at the Tsinghua National Institute of Financial Research. Oriented towards solving practical problems related to economy and finance, the Center aims to become an important think tank in the financial field by serving the purpose of financial decision-making and to play an active role in promoting international exchanges in the economic and financial fields.

Deborah Lehr serves as CEO of Basilinna and Gracie Sun is President of China for Basillinna.