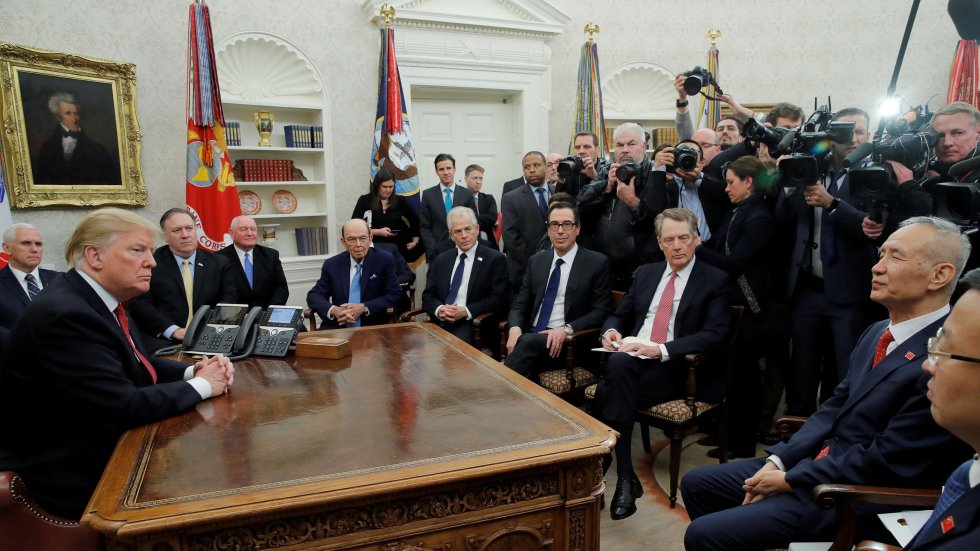 Tom Keene: Let us migrate forward to trade, which is most important right now.

Jonathan Ferro: Let us do that right now with Deborah Lehr, Paulson Institute Vice Chairman. Deborah, great to have you with us on the program. High-level trade talks commencing in Washington D.C.--What is your base case this week?

Deborah Lehr: Well, it's a very positive sign that Vice Premier Liu He is here, and the chances I think are good that they'll get some kind of framework deal. Not the final deal, but at least enough to have it go to the two presidents to finalize.

Ferro: So, Deborah is that something a little bit more than talks about talks? What do you think the framework will actually look like?

Lehr: Well there are several components that need to be included in any kind of final deal. One, the president has made clear that he wants to see additional exports from the United States to China, so expect the Chinese to announce purchases of U.S. products. They've already announced some in the agricultural area, including commitments on soybeans. And then there needs to be market access for companies. It doesn't make sense at all when you've got the largest banks in the world in China, and you can't have 100% owned securities firm.

Keene: Where are we on the legal history of joint ventures? If we're going to do more with trade, there has to be combinations, joint ventures; can U.S. companies still go in and do JV's to get things done in China?

Lehr: Well, legally they're allowed, of course, to go in and do joint ventures. But I think what the U.S. government is pushing for is that the choice of a joint venture should be up to the company and based on commercial terms, not to be required by the Chinese government. Obviously, we understand if there are some sectors that are sensitive, but the fact [that] the Goldman Sachs or JP Morgan can't have 100% owned securities firm is just outrageous.

Ferro: Deborah, we are at a point where maybe China is beyond having the standard excuse they're an emerging markets whereby they need to do these kind of things. Deborah do you think we are past that point with China? Is China developed enough that they can no longer lean on that emerging market status as an excuse?

Lehr: I think in some sectors it might be an excuse. In those we need to see some sort of timetable for opening. But, certainly in some sectors, particularly in the financial and technology area there is no excuse at all.

Keene: Deborah Lehr with us, she is Vice Chairman of the Paulson Institute, and we have her on now to talk about some of the questions of antiquities. She is an expert on the world's antiquities; let's dovetail trade into that ultimate trade […] which is tourism. I can go back to 1974 and the magic of finding the Terracotta Army in China. Everyone goes there, everybody makes the trek, it's one of the few reasons to go inland in the Pacific rim for American tourists. Is tourism part of the trade debate, and where is that right now?

Lehr: That's an excellent question, it hasn't really been part of the debate, although it has been one of the U.S.'s great exports and certainly one of China's great exports. The number of Chinese tourists continue to grow significantly, and it's become a huge potential market for countries like France, which is the number one destination and even now growing for countries in the Middle East.

Keene: Well, I mean, Jon Ferro sees that when he's in Gucci on Fifth Avenue, I get that. But what about us over there, when Americans go over to China, has that diminished with all the uproar over the last couple years?

Lehr: It has, there's not the same number of American tourists travelling, even though there's a significant number. It has been dropping because there have been concerns, including travel warnings that have come out of the State Department recently.

Ferro: Well, let's talk about something that came out of the Department of Justice in the last couple of days. This following paragraph: "The alleged conduct occurred from the indictment in 2012 - 2014, and includes an internal Huawei announcement that the company was offering bonus to employees who succeeded in stealing confidential information from other companies". Ratcheting up the pressure on Huawei ahead of these trade talks, Deborah, how does this feature as these individuals sit down in Washington D.C. to try and come up with what you describe as a trade framework? Is Huawei the elephant in the room?

Lehr: I'm not sure if it's the elephant in the room but it's certainly like the Chinese government going after Microsoft, IBM, and Apple all at the same time. It's a national champion in terms of its a company that people are very proud of, and while Huawei has been under scrutiny for over 20 years, this is the first time they've gone after it in a significant way. And the Justice Department has decided to go after an individual, which has really gotten people's attention in China, versus just the company like they did with ZTE.

Keene: But from where you sit, to John's good question, the Chinese at these tables of trade can't ignore that, can they? Given the history and heritage of Ms. Meng (Wanzhou) with the Communist Party?

Lehr: No they can't ignore that, I mean it's a very significant issue, and as I've said it's gotten a lot of attention in China because they have gone after an individual versus the company. While they understand, maybe not completely, but just a little bit that our justice system works separately from the political system, the fact that the president did come out and say that it'd potentially be part of a trade deal, led many to believe that this is political.

Keene: This has been very helpful, Deborah Lehr, thank you. She's Vice Chairman of the Paulson Institute and greatly appreciate it. John I thought you phrased that question just perfectly, that if it was AT&T or Microsoft or Apple we'd be in an uproar.

Ferro: Let's be clear about something though. The Chinese have blocked many American companies from operating in China. It's not apples for apples, but let's not pretend we have unfettered access into Chinese markets, and that is why they're sitting around the table in Washington today, because the United States does not.

Keene: I would say on and off the record the thunderous consensus of every CEO I've ever talked to is JVs always disappoint in China.