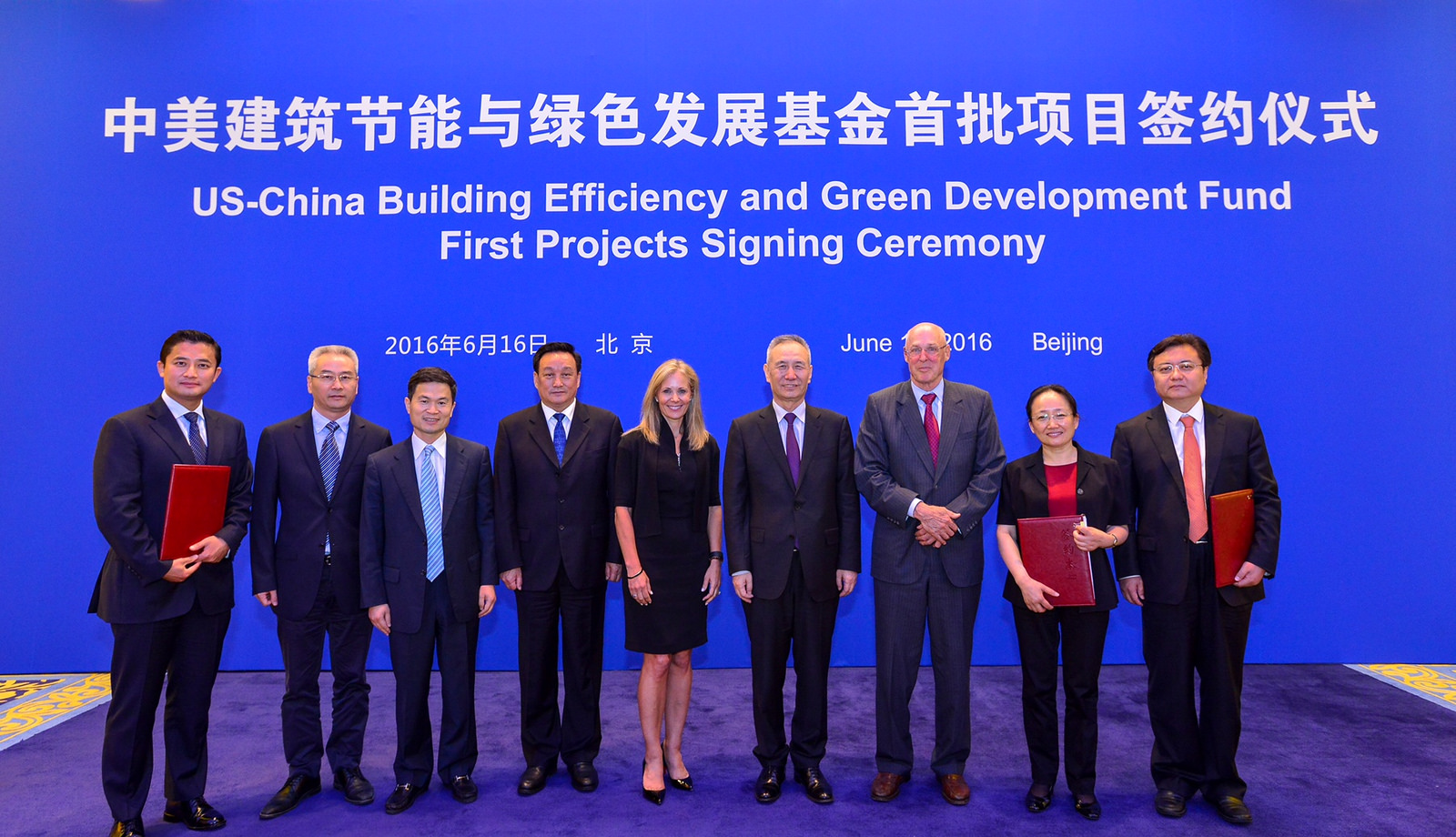 This article is cross-posted from the Paulson Institute. Read the original article here.

Beijing—The Paulson Institute joined the Office of the Central Leading Group for Financial and Economic Affairs on June 16 to witness the signing of the first letters of intent for projects to receive funding from the Building Energy Efficiency and Green Development Fund. The Paulson Institute has served as a non-commercial advisor to the fund, given its commitment to promoting more green development to reduce carbon emissions that lead to climate change, particularly in the buildings sector.

This fund, conceived in the lead up to President Xi Jinping’s 2015 visit to the United States and, most recently, announced as an important deliverable for the annual U.S.-China Strategic & Economic Dialogue, aims to provide financing to bring innovative technologies from the United States to China to help reduce building-energy emissions. As buildings account for 40% of total global carbon emissions, this U.S.-China fund aims to support China’s efforts to implement its ambitious climate change agenda. The confirmed initial capitalization is no less than 20 billion yuan ($3.05 billion.)

Representatives from the Paulson Institute, the Office of the Central Leading Group for Financial and Economic Affairs and main participating U.S. and Chinese companies observed the signing ceremony, during which five Letters of Intent (LOI) were signed: three for projects in the city of Zhenjiang, Jiangsu, and two for projects in the city of Zhangjiakou, Hebei. The LOIs, signed by representatives from the fund as well as from each municipality, respectively, establish the appropriate infrastructure for investment in these local green projects. The fund will cooperate with local governments to help establish and promote the development of local green industry funds. For example, in Zhenjiang they will invest in energy efficiency upgrades of major existing industrial enterprises, as well as heating systems, including those of Yangtze River basin industrial enterprises and residential heating in winter. The projects will recoup investments through long-term energy savings.

“The positive progress on green finance cooperation between China and the United States is highlighted in the China-U.S. Joint Statement of the eighth U.S.-China Strategic & Economic Dialogue,” said Liu He, Minister of the Office of the Central Leading Group on Financial and Economic Affairs. “We hope these projects can start from beginning and make solid progress, play a leading and demonstrative role in promoting green finance and industry, and in on-going bilateral BIT negotiations. These projects are expected to explore the optimal channels and effective models for green finance cooperation among our two counties, so as to lay a solid foundation for further and comprehensive cooperation in the future.”

“The Paulson Institute is pleased to support this unique cross-border public-private partnership, which I believe can marry the best of U.S. technology, know-how, and experience with Chinese creativity, market scale, and rapid commercialization,” said Henry M. Paulson, Jr., chairman of the non-profit Paulson Institute, which helped convene the participants in the project. “We are delighted to see these players come together to promote the development of a low-carbon economy at the municipal level.”

Hou Liang, the Communist Party secretary of Zhangjiakou, said: “Zhangjiakou is making great efforts to seize these historic opportunities, including the integrated development of Jing-Jin-Ji, the 2022 Winter Olympic co-hosted by Beijing and Zhangjiakou, and the development of a National Renewable Energy Integration Demonstration Area, to promote the upgrade and transition toward green development. The LOIs signed here today are no doubt a great stimulus to our green development strategy."

“The three Zhenjiang projects signed today are of critical importance to the deepening of structural reform, as well as milestones of low-carbon city development,” Zhu Xiaoming, the mayor of Zhenjiang, said. “We are confident that our cooperation in this field will be a model for green development, a model for Sino-U.S. cooperation, and a model for the commercial operation of the fund. These projects will provide useful experience to promote the development of national low-carbon cities, to ensure that Zhenjiang is a leader in reaching peak carbon emission in 2020.”

The parent fund and these two cities will co-establish municipal-level Building Energy Efficiency and Green Development Funds to support local energy efficiency efforts. If successful, the intent is to replicate this municipal fund model in other cities across China.

About the Paulson Institute

The Paulson Institute is a non-partisan, non-profit “think and do” tank grounded in the principle that today’s most pressing economic and environmental challenges can be solved only if the United States and China work in complementary ways. Our mission is to strengthen U.S.-China relations and to advance sustainable economic growth and environmental protection in both countries. Our programs focus on advancing the transition to more sustainable, low-carbon economic models in China and the United States through industrial transformation, sustainable urbanization programs, and environmental conservation. We also promote bilateral cross-border investment that will help create jobs and strengthen U.S.-China relations. Our Think Tank publishes prescriptive and analytical papers from leading scholars and practitioners on the most important macroeconomic and structural reform issues facing China today. Founded in 2011 by Henry M. Paulson, Jr., the 74th Secretary of the Treasury and former Chief Executive Officer of Goldman Sachs, the Institute is based in Chicago and has offices in Washington, San Francisco, and Beijing.