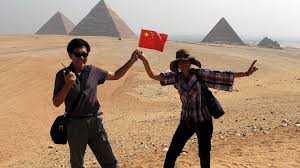 Few nations boast a richer cultural lineage than China or Egypt. To draw a line from their present to their past is to trace the evolution of human civilization. Despite this shared global relevance, until recently the two nations have remained isolated by geographical circumstance. Now that is beginning to change as Chinese tourists flock to Egypt in record numbers.

China’s outbound tourism market exports upwards of 150 million tourists annually, and its spotlight has turned towards Egypt. While the absolute numbers are still modest, the rate of growth is startling; in 2014, just 65,000 Chinese tourists visited Egypt, but by the end of 2017 that number had nearly quintupled to almost 300,000. What’s more, Egypt had a contraction in total tourism during this time, suggesting that the flow of inbound Chinese tourists is resilient.

China is now the fourth largest tourism market for Egypt, and Egypt falls behind only Vietnam in the pace of growth for incoming Chinese tourists. This speaks to the strength of Chinese interest, considering the significant proximity advantage of Vietnam.

So, what accounts for this sudden and sustained surge in people-to-people exchange and interaction?

Underlying the rise of Chinese tourism to Egypt is a larger effort to strengthen economic ties between the two nations. In the wake of President Xi Jinping's 2016 visit to Cairo—resulting in dozens of deals being inked on energy, infrastructure, and transport—Chinese FDI in Egypt has shot up; the first half of 2017 saw a 75% increase in Chinese FDI. Egypt also revamped its investment laws, and Chinese companies have moved to invest in areas where Chinese talent aligns with Egyptian interest, particularly in renewable energy, fintech, and large-scale infrastructure projects.

With outbound Chinese tourists spending $115 billion in 2017—more than any other outbound market—tourism is one more logical economic bridge. Just last year, the two nations signed a pledge to bring one million Chinese tourists to Egypt in 2018. To that end, both governments have taken steps to promote travel and streamline logistics.

Beginning in July 2016, Chinese tourists could receive their visa on arrival in Egypt, and could also be visa-exempt if they met certain booking and financial requirements. The frequency and size of flights to and from the two nations—previously an impediment—have also been expanded, with new charter planes commissioned and new flights created that connect locations like Xi’an and Aswan, plus direct flights from Kunming and Chengdu to Cairo.

With a 2017 Nielsen report finding that Chinese tourists weight visa availability more than their peers, these logistic improvements can help move the needle.

This would be moot were it not Chinese citizens’ interest in Egypt as a travel destination. For tourists who wish to travel beyond the familiar local destinations, Egypt’s foreign landscape, historic sites, and archeological treasures offer experiences that cannot be replicated.

Although younger Chinese travelers are moving away from chartered tours, Chinese tourists still rely on group packages, and Egypt has plenty of experience managing group tour packages surrounding its most sought-after destinations. As China’s outbound tourism expands and the economic ties between the nations grow stronger, tourists could be at the forefront of the new relationship.