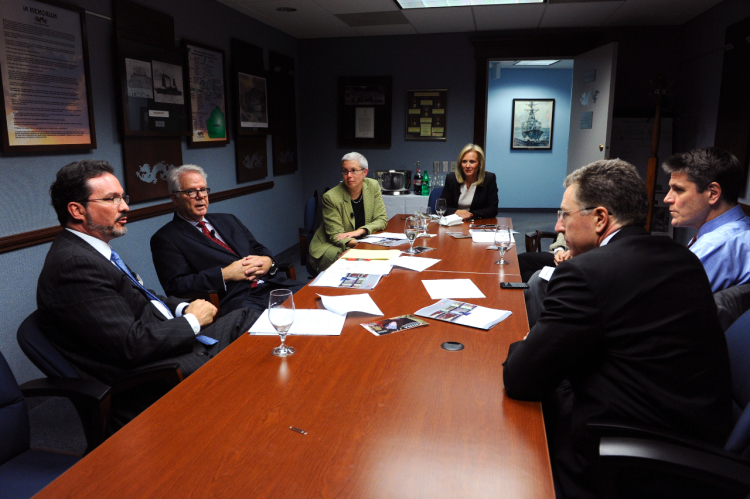 This article is cross-posted from the McCain Institute. Read the original article here.

THE DEBATE:  On Thursday October 23rd, The McCain Institute for International Leadership hosted the debate: “China: Is Engagement Still Working?” at the U.S. Navy Memorial Burke Theater in Washington, DC. The debate was intended to center on the U.S. policy towards China in light of the growing U.S.-China economic relationship, China’s repression of human rights and democracy, and its military build-up in the East and South China Seas.

THE DEBATERS: Arguing that U.S. engagement requires more consistent, and sometimes tougher, messaging were Michael J. Green, Senior Vice President for Asia and Japan Chair at the Center for Strategic and International Studies and Sophie Richardson, China Director at Human Rights Watch. Arguing that toughness must nonetheless take heed of the full range of our complex economic, political, and security interests with respect to China were David M. Lampton, Hyman Professor and Director of China Studies at the Johns Hopkins School of Advanced International Studies and Deborah M. Lehr, Senior Fellow of the Paulson Institute.

KEY POINTS in favor of engagement: U.S. Engagement Requires more Consistent, Tougher Messaging · The U.S. acts as if there is a China “exceptionalism” by not openly criticizing their human rights record – if the U.S. shows leadership here other like-minded countries will follow suit. · Key that the U.S. is consistent in its support of regional allies in the Asia-Pacific – must set clear expectations that if China tries to coerce its neighbors it would push the U.S. even harder to its allies. · The U.S. should be wary of speaking out in favor of a new model of great power relations in the Asia-Pacific as this would only reaffirm China’s desire for a bipolar regional system that accepts the presence of Beijing’s spheres of influence. · Only focusing on economic cooperation with China is insufficient – the U.S. should also encourage more military-to-military cooperation with China.

KEY POINTS against engagement: U.S. Engagement Must Take into Account the Complex Interests Involved · China is an enormous, complex country and we need to appreciate that its development is still a work in progress – although China is more open today, its governing system has not kept up with other developments. · While Washington should, of course, criticize China’s human rights record, it should do so privately and not in public as this would only have the opposite effect on the Chinese government – instead we should quietly support civil society and help build local capacity in China. · The U.S. should engage China through economics – the economic relationship underpins the U.S. strategic interests with China and represents an enormous opportunity to bring China into a rules-based order. · Criticizing China too vocally on democracy and human rights can end up hurting American business interests in China while helping our foreign competitors, especially since many of these partner countries often trail behind us on these issues.

Michael J. Green: stressed the importance of deepening and broadening the U.S. engagement with China and to explore new areas of cooperation as a part of a consistent U.S. strategy for the region that includes pursuing the Trans-Pacific Partnership while pursuing TPP and broader security partnerships across the region.

Sophie Richardson: emphasized that the U.S. must publically speak out more loudly about the deteriorating human rights and democracy situation inside China.

David M. Lampton: pointed out that while the U.S. needs to get its own house in order to be more effective with China, it should also develop an inclusive strategic vision that takes as its key element constructing inclusive economic and security organizations that include the United States and China, along with others, not parallel sets of regional institutions constantly at loggerheads with each other.