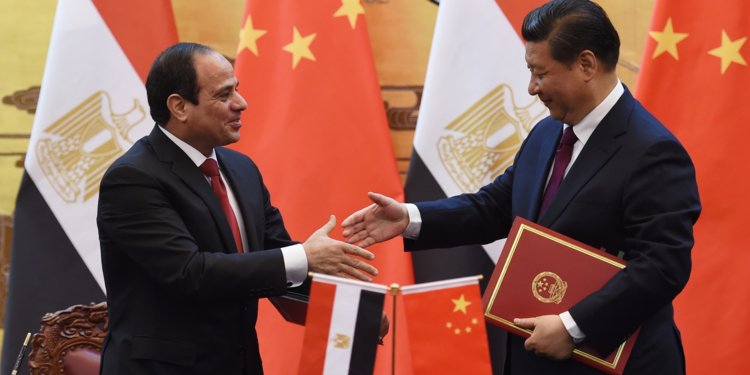 On his recent visit to Egypt, Chinese Vice President Wang Qishan noted that "both [of these] ancient civilizations share extensive interests and great cooperation potential." Egypt and China have much in common – a long and storied history, being a dominant power in their regions and strong potential for being partners in future growth. As China seeks to expand and diversify, there is much to attract a Chinese company to the land of the Great Pyramids.

President Xi has declared Egypt to be one of the "hubs" of his Belt and Road Initiative. With its strategic location, Egypt is a gateway to both the Middle East and Africa, serving as a vital node in a larger network connecting China's companies to these large and growing markets.

To highlight the importance of the "strategic relationship," Vice President Wang visited Cairo during his 2018 regional tour to seek out bilateral opportunities for Chinese companies, as well as to explore and source much needed technology for use in China. As China diversifies away from reliance on the U.S. and EU during tense times in the bilateral relationships, the Middle East – particularly Egypt – could be the beneficiaries.

For its part, Egypt has reestablished political stability under President El Sisi. Egypt now also boasts one of the highest growth rates in the Middle East and Africa, topping 5 percent for the foreseeable future. El Sisi has announced that Egypt is "open for business," and is campaigning to attract foreign goods, services and investment into the country. Foreign investment restrictions have been loosened, and it is now easier to repatriate profits.

The conditions in Egypt today mirror many of those that existed in China a decade ago. Egypt has a large and growing population, a young and innovative work force, and has made great progress in providing internet accessibility, yet still a large number of its citizens live well under the poverty line without access to basic services. Policies that China applied to address these challenges might have application in assisting Egypt. Moreover, technology that China has developed to overcome these challenges is well-suited for emerging markets like Egypt. There is an alignment between China's burgeoning industries, and the need for their goods and services in Egypt.

Sustainability is a case in point. The dangers of pollution threaten the physical and economic well-being of Egypt's citizens, which the El Sisi administration is attempting to address. As just one example, transportation is a major greenhouse gas emitter in Egypt, with over half of all cars concentrated in the Cairo area. To encourage the use of electric cars, the government has removed import tariffs, and is exploring additional means to promote the import and use of electric cars. Given China's status as the world's largest e-car manufacturer, Egypt should be a natural export target as well as a potential manufacturing hub for the region.

The same holds true for renewable energy. Egypt is committed to diversifying its energy mix to 20 percent renewables by 2022, and 42 percent by 2035. It cannot achieve these goals on its own. China's renewable energy companies are some of the best and most innovative in the world. They provide cost competitive products combined with deep experience from building solar, wind and hydro energy farms in China and around the world. Their experience can help Egypt meet its goals on energy, while sharing the know-how for Egypt to become competitive in this sector.

In the fintech space, China's rapid development of a cashless society has created simultaneously the largest and most innovative market for online financial services. These digital applications have brought millions into the financial system, spurring further innovation and economic growth, especially for small and medium sized companies. Fintech will be a core aspect of the Egyptian's government plans to increase financial inclusion.

Like the China of fifteen years past, in Egypt today less than 15 percent of the population has a bank account, and even fewer have access to credit cards. Meanwhile, mobile phone penetration in the country is over 100 percent with the use of smart phones rapidly on the rise. Egypt is exploring how to move to a digital financial system with mobile services at its core, and the Chinese model holds many examples.

China has shown that mobile fintech tools can provide those outside the traditional banking sector with access to financing, insurance, wealth management products and more. The availability of quick decision-making and small loans – based on Chinese algorithms for processing big data at rapid rates – could have a transformational impact on startup businesses and stimulate the economy in the process. As Egypt develops its online banking regulatory structure, Chinese fintech companies should find a ready market.

Chinese political leaders like Wang Qishan have added Egypt to their travel stops in the region, and Chinese companies should follow suit. It is time that the "great cooperation potential" that Vice President Wang referred to becomes reality.