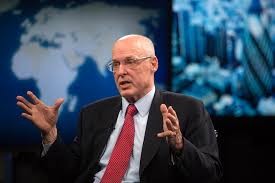 This article is cross-posted from Bloomberg. Read the original article here.

China and the U.S. are bulking up the size and scope of a fund created to finance green projects to about $3 billion, according to two people familiar with the decision.

The capital boost will increase the fund’s size by 50 percent from $2 billion and broaden its investment mandate to green projects beyond just improving the energy efficiency of buildings, said the people, who asked not be identified because the information isn’t public.

The fund was initiated by China’s Central Leading Group for Financial and Economic Affairs and the Paulson Institute, a non-profit founded by former Goldman Sachs Group Inc. Chief Executive Officer Henry M. Paulson Jr. China is spurring clean-energy investments as it mobilizes to satisfy a pledge to peak carbon emissions by around 2030. The world’s most populous nation will need to invest an average of about 2.5 trillion yuan ($381 billion) a year to meet its target, according to a study by the Research Center for Climate and Energy Finance.

On Monday one of China’s top climate envoys prodded the U.S. to do more to help. “I believe the U.S. government can do better,” in particular by transferring advanced technologies to help developing countries and providing funds to improve their capabilities in tackling climate change and extreme weather, said Xie Zhenhua, China’s special representative on climate change.

Paulson, who also served as U.S. Treasury Secretary from 2006 to 2009, said in a February speech in Shanghai that his “institute is working with the Chinese government as well as U.S. and Chinese firms on an initiative” to boost energy efficiency in China. New financing models will be needed along with “large amounts of private capital” for green projects, he said.

The Paulson Institute, which focuses on environmental issues in China, began talks last summer with the Central Leading Group about ways to support Chinese efforts to reduce emissions, said Deborah M. Lehr, a senior fellow at the Chicago-based organization. After the Chinese made it clear they wanted to deploy U.S. technologies to fight pollution but that they considered them too expensive, the institute set up meetings between financial and industrial companies from both countries to help facilitate financing. The effort was announced in September before Chinese President Xi Jinping’s state visit to the U.S. “What we have done is acted as a matchmaker to encourage these entities to talk to each other in ways that they may not have thought of,” Lehr said in an interview.

China’s provinces of Zhejiang, Jiangsu, Henan, and Hebei will receive the first batch of investments from the fund, according to the people. The Wall Street Journal reported Monday that Xi’s top economic adviser Liu He is spearheading efforts to encourage U.S. companies to invest in energy-efficient projects in China, citing unidentified officials with knowledge of the matter. Liu, director of the general office of the Central Leading Group for Financial and Economic Affairs, is also deputy director of National Development and Reform Commission.