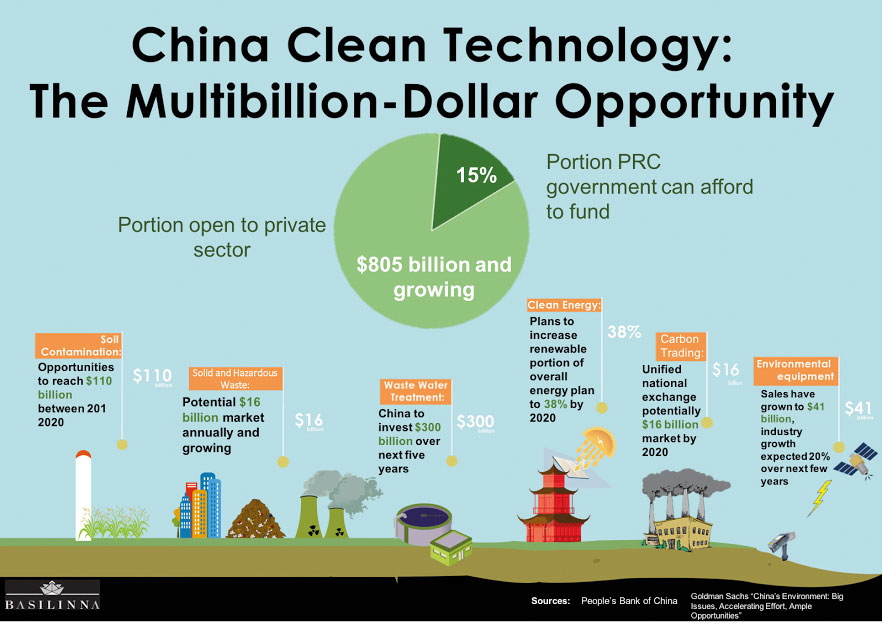 This article is cross-printed from the Huffington Post. Read the original article here.

China is embarking on the most ambitious environmental reform program in history — by necessity. China’s environmental woes are nothing new, but they have hit an inflection point. Less than 40 percent of China’s groundwater is safe for consumption. Only 16 of the 161 cities monitored met the national standards of urban air quality in 2014. Almost 20 per of China’s surveyed soil exceeds the national pollution standards, which amounts to 19 percent of their arable land being contaminated. And, while the rate of growth is slowing, China still emits more CO₂ than that of the US and the EU combined.

Environmental protests are the major cause of social unrest across the country — even edging out official graft. President Xi’s government recognizes that for political, economic and, certainly, environmental reasons, the government must move quickly to halt this growing crisis. China’s 13th Five-Year Plan — its economic blueprint for 2016 to 2020 — is expected to include bold measures to redress these problems.

Total environmental expenditures are expected to exceed $1 trillion during the execution period of the 13th Five Year Plan. This amounts to a 60 percent increase over the last Five-Year Plan. But, the Chinese government can fund only 15 percent of this initiative.

The dire situation presents myriad opportunities for the private sector to support China’s ambitious environmental goals. A recent report by Goldman Sachs, “China’s Environment: Big Issues, Accelerating Effort, Ample Opportunities,” states that cleaning up China’s environment will be multibillion-dollar opportunity for the domestic and international private sector. In fact, financing from the private sector — either directly or in public private partnerships — will bring new technologies to China, spur innovative solutions and create jobs in environmental reform, a growing field.

China is trying to do its part. Goldman’s calculations, based on interviews with Chinese officials and precedent in other countries, predict that China will increase its investments in the environmental cleanup to about 2 percent of GDP, on par with investments made by the United States, Japan and Germany for their own environmental solutions. What China needs now is support from private sector environmental investors.

The Goldman Sachs study has identified five key opportunities for companies in the clean tech sector:

1. Soil remediation: Contamination of China’s soil is becoming the most serious threat to its agricultural self-sufficiency. According to the Goldman report, heavy metal contamination affects 12 million tons of grain. This means 24 million people — or the population of Australia — will be impacted by contaminated grain. It is expected that the soil clean up will account for 56 percent of the total environmental investment by the Chinese government. China’s spending on soil remediation is likely to reach $110 billion between 2016-2020, an increase in 580 percent over current spending.

2. Solid and hazardous waste management: Waste management is a small, untapped but rapidly growing sector in China. The growth potential in “waste” — municipal, industrial, electronic and hazardous — is significant. With China’s push for mass urbanization, municipal solid waste growth is piling up — literally. From 2000-2012, China’s market for waste grew by 3.1 percent, compared to just 0.2 percent in the United States. Hazardous waste, the negative by-product of strong industrial growth, increased by almost 15 percent while it actually decreased over the same time period in the US. The potential of the urban waste market could reach $16 billion by 2020. This is still well under the US market, where solid waste management nets approximately $40 billion annually.

3. Wastewater treatment: China is predicted to invest $300 billion over the next five years in cleaning up China’s polluted waters, as well as treatment and supply of potable water. Companies providing solutions in cleaning wastewater, new irrigation methods and other related methods will find significant opportunities. During a recent visit to Portland by a delegation of about 20 mayors from Zhejiang province organized by the Paulson Institute, they specifically asked to see the latest in wastewater technologies as they were actively shopping for new options.

4. Clean energy: China’s ambitious plan to increase renewable energy to 38 percent of its total energy composition by 2020 requires major investments in alternative sources. China is expected to maintain its position for the foreseeable future as the largest builder of nuclear plants with 27 currently under construction; the largest installer of solar; and wind energy capacity will increase almost ten fold. Foreign service providers in this area, as well as equipment manufacturers, will see many opportunities for sales in this field.

5. Pollution monitoring equipment: In order to reduce pollution, China must understand its source, as well as able able to track its progression. One of the key areas of opportunity in China is equipment that can be used to do this job. Over the past ten years, environmental equipment sales in China have grown to $41 billion dollars. The industry is expected to growth by 20 percent in the next few years.

To be sure, it is tragic that the environmental situation has reached such a crisis state in China and there will be no quick fixes. But the political will to right the ship is presenting new opportunities for the private sector, which could be a bright spot for the global economy.