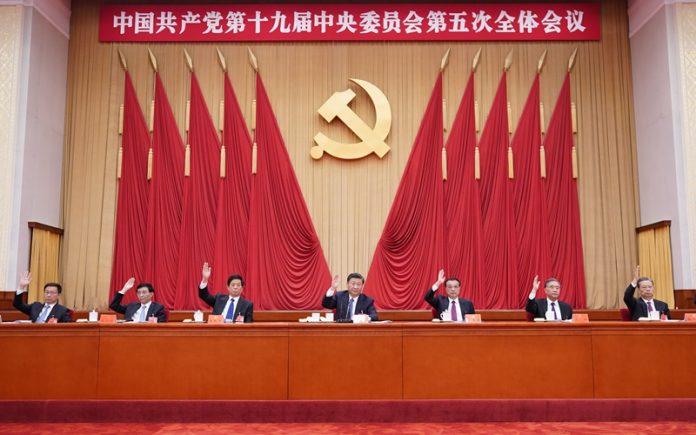 For China watchers, there were perhaps no surprises in China’s announcement of the 14thFive Year Plan (FYP) as most of the content had been rolled out and foreshadowed over the past two years. The plan is ambitious and confident covering climate, tech self-reliance, promoting domestic demand (featured in the dual-circulation strategy), Taiwan, and more. Yet, this plan marks a fundamental paradigm shift to China’s economic trajectory, and contrary to the popular narrative, it does not mean that China is turning inward. In fact, there is quite a lot in this plan about opening-up aimed at attracting and retaining foreign investment, which has been increasing despite the deteriorating external environment China faces around the world.

China plans its economy in five-year increments, and this is perhaps one of the more consequential plans in China’s history given the hardened international environment and historic global economic downturn. This plan has been underdevelopment for the past two years, with President Xi being given credit for personally leading its formulation.

There were no personnel changes announced coming out of the 5th Plenum – those will come in 2022 with the Party Congress likely in October and in 2023 during the National People’s Congress. Xi will likely retain the Presidency for a third term – along with the military and Party leadership – to see through the implementation of this ambitious plan and guide China through this new chapter.

The following is a summary of the communique coming out of the 5th Plenum, which provides the elements of the 14th FYP, and an analysis of how the 13thFYP compares to the 14th FYP. The draft implementation plan for the14th FYP will be shared publicly in early November, and approved and officially released during the National People’s Congress next March. Many more details will come out over the following weeks and months as the regulators meet to set targets and implementation plans; this is a brief overview of what was announced last week.

From October26-29, China’s Communist Party held its 5th Plenum convening members of the 19th Central Committee to announce plans for the economic trajectory of the country over the next five years along with a vision for the next 15 years. The communique coming out of the session included three sections: achievements of the 13th Five Year Plan (2016-2020), the vision for 2035, and the broad outlines of the 14th Five Year Plan(2021-2026).

A lengthy list of accomplishments was outlined in the communique that included the standard nods to successfully deepening reform and strengthening the rule of law and Party governance (See Attachment 1 for translation of the full list). Noteworthy points included:

China’s leaders envision a strong, technologically advanced country leading innovation and new industrialization. While there is an intention to strengthen military capabilities, there is also the characterization of a “Peaceful China.” Following China’s historic commitment to carbon neutrality by 2060, announced by President Xi at the UN General Assembly in September, there is a focus on an eco-friendly way of life in “Beautiful China” with peaking emissions in 2030 and steady declines thereafter (see Attachment 2 for a full summary of achievements).

One of the more notable aspects of the 2035 vision is the characterization of per capita GDP reaching levels of “moderately developed countries.” According to the data from World Bank, moderately developed countries include Greece, Poland, and Portugal with a per capita GDP in the US$18,000-$24,000 – China is currently at US$10,200.  Over this period, China is likely to see the middle class become the largest segment of the population. Nevertheless, the vision includes reducing disparities in development between regions and in overall living standards – this point was emphasized in the October 30thpress conference. Notably, China is now home to the world’s largest billionaire class with 878 members as of 2020.

1. Boost Technological Innovation: This is one of the most analyzed aspects of the plan as it is driven not only by innovation but also “self-reliance”, which has become imperative for China’s leaders given U.S. efforts to shut down tech giants, Huawei and ZTE, and cut off access to semiconductors crucial to their business. The plan characterizes scientific and technological frontiers as the “main economic battlefield.” It calls for strengthening human resources and boosting innovation, among other systemic enhancements.

3. New Development Pattern/Dual Circulation Strategy: This is another highly watched element of the plan: boosting domestic demand. This is one half of the famous Dual-Circulation Strategy, one of President Xi’s signature initiatives that center on expanding the domestic market and maintaining the export market. It also includes deepening supply-side structural reform as well.

4. Deepening Reform: Reform in the context of this plan means building a “high-level socialist market economic system.” Plans include giving full play to the “decisive role of the market in the allocation of resources” – including land, labor, technological knowledge, capital, and data – as well as improving government functions, such as establishing a modern fiscal, tax, and financial system.

5. Revitalize Rural Areas: Rural revitalization has been discussed throughout the previous five-year plan. This plan calls for a new type of urban-rural relationship in which industry and agriculture are mutually reinforcing and urban and rural areas are complementary. It calls for modernizing agriculture and alleviating poverty. For the first time, rural revitalization includes ensuring food security and reducing food waste.

7. Develop Cultural Industries: This has long been a priority sector for boosting domestic demand and will remain so. Notably, the plan talks about “increasing the country’s cultural soft power” under the ideology of Marxism. China’s efforts to influence and censor entertainment abroad have come under fire recently.

9. Achieve a Higher-level Opening Up: Chinese leaders are committing to “raising the level of opening up” and promoting trade and investment liberalization. “China will open up to the outside world on a broader scale, in a broader field, and at a deeper level,” the Communique says. This section also includes improving the quality of investment and projects associated with the Belt and Road Initiative as well as what is becoming increasingly controversial: actively participating in the reform of the economic governance system.

10. Promote People's Livelihood: China is committed to improving the quality of life of its people. China aims to improve basic public services, raise people's income levels, prioritize employment policies, build a high-quality education system, improve the multi-level social security system, innovate government, and implement a national strategy to actively address the aging of the population. China’s aging population is aging faster than any other country in modern history, according to the statistics, by the end of 2019, China has 12.6% of 65 years old and above aging population. The population is expected to peak in 2029 and then hit a steady decline, which will undermine plans to spur domestic consumption.

11. Ensure and Enhance National Security: This is a reaffirmation of the national security system with broad language about preventing and neutralizing risks affecting China's modernization process while maintaining social stability and security.

12. Modernize National Defense and Military Forces: Notably, this section includes language about comprehensively strengthening military training and preparation for war, which has not been included in a FYP since 1953.

13. Hong Kong, Macao, and Taiwan: For Hong Kong and Macao, the plan includes maintaining long-term prosperity and stability. On Taiwan, however, there is a major departure from the previous language about promoting peaceful development of cross-strait relations to include achieving reunification.

Comparative  Analysis: How Does the 13th  Plan Stack Up Against the 14th?

After a pandemic and four years of a declining U.S.-China relationship, China faces a dramatically different world from the time of the previous Five-Year Plan. Thus, the 14th Plan marks several notable departures.

1. No Economic Growth Target Goal: The 13th FYP specified a doubling of China’s GDP between 2010 and 2020. The 14th FYP only says the per capita GDP will reach the level of moderately developed countries– no specific goals.

2. Financial Regulatory Reform Complete: Under the 13th Five Year Plan, China underwent a massive restructuring of the financial regulatory system and has announced major sector openings as part of the Phase One trade agreement with the U.S. Thus, the 14th FYP only states that "China will establish a modern fiscal, tax and financial system."

3.  No SOE Reform – in this plan: The 13th FYP aimed to improve the management of all types of state-owned assets. SOE reform is absent from the 14th plan; however, the State Council Informatization Office and the State-owned Assets Supervision and Administration Commission announced introduced the "SOE Reform Three-Year Plan(2020-2022), in October and it does reference linking to the 14thFYP. The U.S. and EU have pushed to include SOE reform in their trade and investment negotiations.

4.  The Primacy of Tech Innovation: Compared with the previous plan, the 14thPlan sets ambitious goals for technological innovation: "China places innovation at the core of the overall situation of its modernization, and regards scientific and technological self-reliance as a strategic support for national development", and, "China will make major breakthroughs in core technologies in key areas, and will become a global leader in innovation." However, it is also noteworthy that the 14th FYP does not mention the controversial Made In China 2025.

5.  The Importance of the Domestic Market: The 13th FYP only said that domestic consumption played an increasing role in the economic growth, while the 14th FYP elevates the importance of expanding the domestic market to the strategic level and proposes to form a huge domestic market by developing two economic circles – domestic and export or Dual Circulation.

6.  Preparation for War: The 14th FYP recognizes that the global environment for China has become tenser, and therefore calls for the People’s Liberation Army (PLA) to strengthen preparations for war; such calls have not appeared in a FYP since 1953. The focus remains on protecting sovereignty, however.

7.  Recasting Cross-Straits Relations: In the 13th FYP, the CPC aims to deepen cross-straits economic cooperation in a mutually beneficial manner to benefit “ordinary people, young people, and SMEs.” In the 14th FYP, the CPC specifies that it aims to achieve reunification – a significant change in the description of the cross-straits relationship.

8. Elevating the Aging Population to a National Strategy: The 13thFYP recognized the challenges of the aging population for the first time resulting in the loosening of China’s one-child policy to allow families to have two children. The 14th FYP elevates addressing the challenges of an aging population to the national strategy level, but does not yet specify new policies or additional changes to the family planning policy.

9. Ensuring National Food Security: Food security is a new addition in the 14thFYP. In August 2020, President Xi Jinping called the amount of food waste "shocking and distressing." China's annual grain production has remained stable at over 1,300 billion kilograms for five consecutive years. However, the global pandemic, locust plagues in Southeast Asia, and massive flooding due to global warming have drastically curtailed global agricultural production, which in turn has heightened China's concerns over agricultural supply and food security.