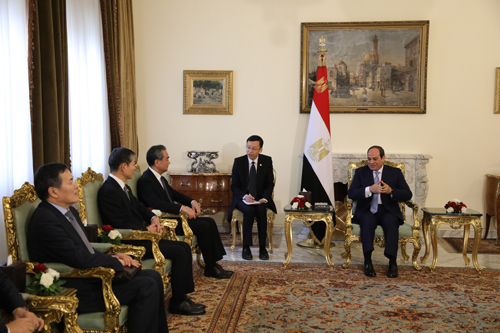 ·     Wang Yi, China's foreign minister, traveled to Egypt as the first stop on his first trip of the NewYear.

·     Both sides solidified the strategic partnership and pledged additional trade, investment, and cooperation.

·     Upcoming year could be significant for Egypt-China cooperation; expect to see a continued push for Belt and Road infrastructure projects as well as a growing emphasis on private sector cooperation, especially with slow down of China’s economy.

This past week, China’s State Councilor and Foreign Minister, Wang Yi, started his annual trip to Africa with his first stop in Egypt. The tradition of making the first foreign trip of the year to Egypt demonstrates the importance China has made relations with the country. Egypt is an essential part of its strategic plan for the Middle East and North Africa as well as a hub for the Belt and Road Initiative (BRI). This week-long trip to Africa will also take Wang to Djibouti, Eritrea, Burundi, and Zimbabwe.

China and Egypt have a long history as Egypt was one of the first non-communist bloc countries to recognize the new government of the People's Republic of China in 1949. Under President Xi Jinping, the relationship has been elevated to a "strategic partnership." With the encouragement of both governments, trade between China and Egypt is growing. Bilateral trade surpassed the US$10-billion mark in 2013 and has been on an upward trajectory since that time. In 2018, it reached US$13.8 billion, making China the largest trading partner of Egypt.

In the year ahead, China will continue to promote large scale infrastructure projects as part of the BRI, especially since many of the contracts are won by Chinese state-owned firms. Yet as China’s economy slows, the financing available for these projects is becoming limited. In fact, China’s financing is down overall for BRI projects.

Given the slow down, especially in China’s state economy, the private sector continues to be the main driver of growth. As a result, the Chinese government is increasing support for Chinese private companies to become leading global players. Egypt is an attractive export and investment market for Chinese firms with its 5% plus growth rate, highly wired population, access to both educated as well as blue-collar workers and a more welcoming regulatory environment for foreign firms. Furthermore, many of the technologies that China has developed are appropriate for Egypt's stage of growth.

State Councilor Wang's remarks in Egypt reflect this new emphasis to promote the Chinese private sector. Wang identified specific opportunities in fintech, renewable energy, and new energy vehicles. Artificial intelligence, 5G telecom equipment, and blockchain are other technologies where China is pushing for global leadership. These are all sectors dominated by China's private sector – and where China is developing some of the leading technology.

State Councilor Wang's stopover in Egypt is a recognition of the importance of Egypt to China as an access point to Africa and the Middle East. Egypt, as one of the largest countries in the region, is pivotal for ensuring the necessary stability, both economic and national security, that China seeks to ensure that its firms continue to have access to the fastest growing economic markets internationally.