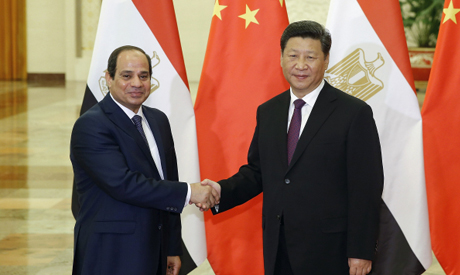 This article is cross-posted from China Daily. Read the original article here.

CAIRO -- The economic situation in Egypt is difficult yet manageable and China is a major economic supporter to the Arab country, said lawmakers and economic experts in a press conference held Wednesday at the State Information Service (SIS) headquarters in Cairo.

They expected the most populous Arab state to gradually get out of its ongoing economic crisis via the intended economic reforms.

Ali al-Moselhy, head of the parliament's economic committee, said that the reform aims at resolving the country's problems and "there are currently serious and brave steps in this regard."

Due to five years of political instability, Egypt has seen severe economic recession that led to a decline in foreign currency reserves, a growing budget deficit that amounted to 339.5 billion Egyptian pounds ($38.2 billion), representing 12.2 percent of the gross domestic product, and raising foreign debts to recently reach $55.8 billion.

The situation led the country to resort to a $12 billion loan from the International Monetary Fund (IMF), whose initial agreement has been reached in August, and it is expected to be accompanied by economic reforms including fuel and energy subsidy cuts.

Addressing the press at the SIS conference, Moselhy said that a punch of state decisions are expected to be announced soon related to raising pensions, improving healthcare and educational services and implementing a social safety net program to limit the suffering of low-income citizens amid economic reforms.

Answering a question of Xinhua's correspondent on China's economic cooperation with Egypt, the lawmaker said that China's economic support to Egypt is "obvious in all fields," including the field of scientific research and remote sensing centers via a donation.

"Thanks to China, Egypt has become a founding member of the Asian Development Bank, which gives Egypt several privileges," he said.

He also described Egypt-China cooperation as "a win-win situation," as China is among the first states that started investments in the Suez Canal region and its investments there are on the rise.

He added that the Chinese yuan's inclusion in the IMF's Special Drawing Rights basket is very important as it can be the main trade currency between Egypt and China without the dollar as intermediate, which may reduce Egypt's demand on the dollar.

Moselhy, also a former social solidarity minister, said that the government should adopt more transparency and communication for citizens on the economic situation and the required reforms.

The recession hit the country's main foreign currency resources including tourism, foreign investments, and exports, which led to a sharp increase in dollar price and a wide gap between its official and black market exchange rates, affecting many import-based businesses.

Meanwhile, Ali Wally, an economic expert and a senior director at a consulting company, attributed the dollar shortage to the gap between the country's increasing dependence on the dollar for imports and its lower dollar resources.

"Egypt needs to have a clear vision and strategy, with identified numbers and goals, to gradually increase its industrial exports as a main source of hard currency," said the expert, stressing that the country should not rely only on dollar revenues from tourism, the Suez Canal and the remittances from Egyptian expatriates.

He continued that Egypt needs to learn from the Chinese experience and send Egyptian personnel to China for training, noting China's exports are 120 times that of Egypt, with 94 percent of the Chinese exports produced in China.

The economist added that it provides opportunities for Egypt as China now wants to strategically move some companies abroad. "Attracting more Chinese companies would push the Egyptian economy," he said.