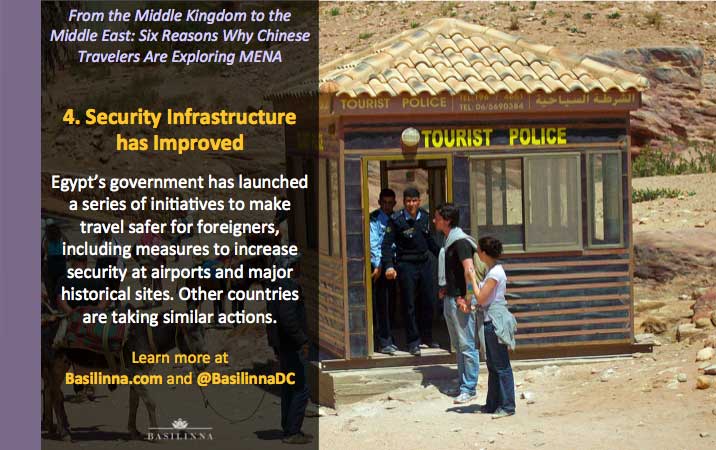 From the Middle Kingdom to the Middle East: Six Reasons Why Chinese Travelers Are Exploring MENA: # 4

Security Infrastructure Has Improved In recent years, safety concerns have slowed travel to the Middle East. Egypt has faced a particularly rough period: the 2015 downing of a plane from Sharm El-Sheikh, recent Palm Sunday church bombings, and unrest in south Sinai have all spooked tourists. However, Egypt’s government has launched a series of initiatives to make travel safer for foreigners, including measures to increase security at airports and major historical sites. Other countries are taking similar actions: after two deadly attacks on tourist attractions, Tunisia has collaborated with G7 nations to improve aviation security through passenger and cargo screening, improve training for security officials, identify and remove extremist content posted online, and train hotel and tourism staff to respond to attacks. The Tunisian government has also built a 125-mile border wall with Libya to help prevent jihadists from crossing into the country. In part because of improved security, tourism in Tunisia is expected to jump 30 percent to around 6.5 million people this year.