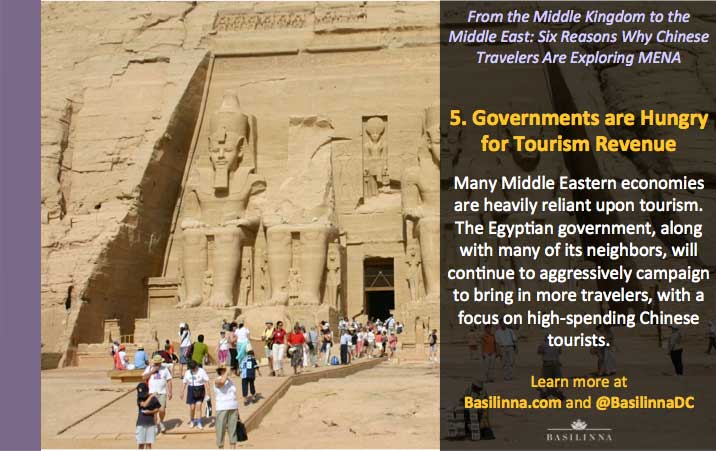 From the Middle Kingdom to the Middle East: Six Reasons Why Chinese Travelers Are Exploring MENA: # 5

Governments are Hungry for Tourism Revenue Many Middle Eastern economies are heavily reliant upon tourism. In Tunisia, one out of every eight workers is directly or indirectly involved in the tourism business; in the UAE, one of ten employees is. The tourism industry is also critical for foreign investment, visitor exports, and foreign currency, which countries facing liquidity crunches are heavily reliant upon. In recent years, however, the economies of the region have suffered from political instability, declining oil prices, weak foreign investment, and currency woes, making tourism revenue more critical than ever. Egypt is especially eager for more tourism revenue; since the Arab Spring, revenues generated from the tourism industry have been halved, creating a $200 billion USD hit to the economy. The Egyptian government, along with many of its neighbors, will continue to aggressively campaign to bring in more travelers, with a focus on high-spending Chinese tourists.