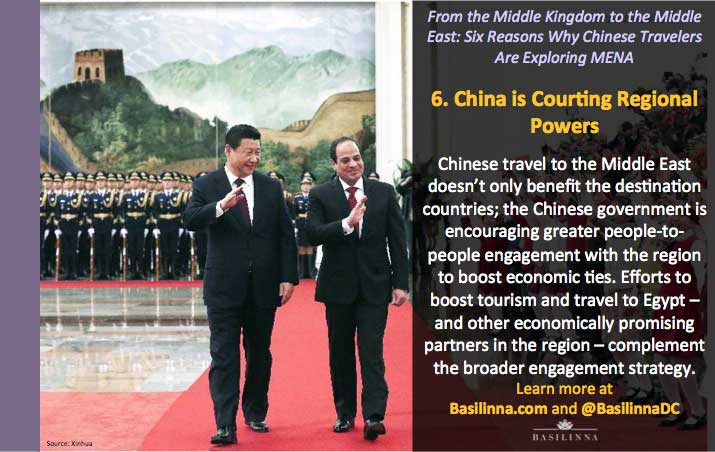 From the Middle Kingdom to the Middle East: Six Reasons Why Chinese Travelers Are Exploring MENA: # 6

China is Courting Regional Powerhouses Chinese travel to the Middle East doesn’t only benefit the destination countries; the Chinese government is encouraging greater people-to-people engagement with the region to boost economic ties. Following several visits to China from Egyptian President al-Sisi, Chinese President Xi Jinping paid a historic visit to Egypt in early 2016 to launch the “One Belt One Road” (OBOR) initiative, which seeks to build a trade network linking China, Central Asia, and the Arab World. OBOR is just one of several steps that the Chinese government is taking to strengthen its six-decade relationship with Cairo; China is also investing heavily in infrastructure and energy projects and is sending trade delegations to boost business ties between the nations. Efforts to boost tourism and travel to Egypt – and other economically promising partners in the region – complement the broader engagement strategy.