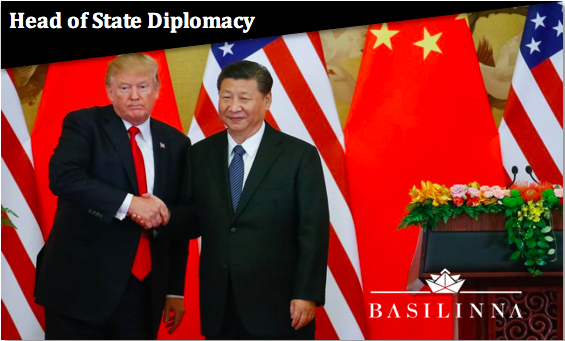 President Trump’s trip to China exemplifies what his doctrine should be called – Head of State Diplomacy. Establishing a personal relationship with his counterpart appears to be a top priority, and the Trump-Xi relationship is a definite bromance. Although many have been critical of his style, don’t underestimate the benefit of a positive tone being set at the top. It is important that this relationship, however, be used to accomplish positive results for U.S. companies. After reviewing the results of the State visit, it has on the economic front.

First, company deals. It always helps to have the President and government promoting your deal and actively campaigning on your behalf. Despite some fudgy numbers, the administration’s announcement of $253 billion is the largest - by far - amount of deliverables for a China trip. In fact, it will make a significant dent in this year’s trade deficit number, which is running at $273 billion for the first nine months of the year.

Second, market access. Unfortunately, while the President did not make it a priority, the Chinese decided to move ahead anyway. As President Xi arrived in Vietnam for the APEC, the Chinese government announced that it will further liberalize the market for financial institutions – banks, brokerages, and asset management companies – and fully lift equity caps within about three years. Over time, this action will create further competition in the Chinese market, as well as bring in the best of class players.

We expect more market access steps to be announced over the next few months. In his work report to the 19th Party Plenum, President Xi stated that this was one of his goals. After talking to Chinese negotiators, it is clear that they are planning further opening in line with Xi’s guidelines. It is important that they do so if there is to be a rebalancing of the trade relationship.

In addition, Vice Premier Wang Yang made a strong statement that technology transfer is not a prerequisite for investment. We have also heard that several Chinese companies will be punished as an example for engaging in this practice. This statement is important because it is a part of the 301 Trade Investigation that the United States has launched against China. Many U.S. companies have been asked to provide sensitive and valuable technology as part of the payment for their access to the Chinese market. This requirement has been a violation of the intellectual property rights of competitive U.S. firms and, at times, resulted in stolen technology by Chinese companies in order to create pirated products.

Stay tuned as China takes some additional steps on intellectual property rights, including potential raids on pirating factories and improving the regulatory and enforcement structure. Clearly, China is taking pro-active steps in an attempt to avoid the sanctions that could come with a positive finding in the 301 investigation. President Trump may have exhibited “irrational exuberance” in his praise of his BFF in the Presidents' club, but let’s hope that it continues to result in progress on the trade front.