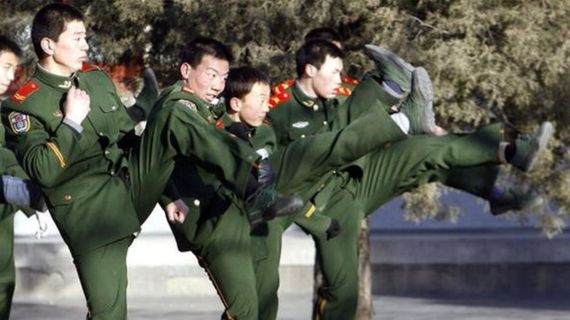 In China’s great hall of the people, shoes speak louder than words

Sinking into the plush chairs in the cavernous Fujian Room of China’s Great Hall of the People, I soak in my surroundings as President Xi Jinping’s interpreter artfully translates Xi’s Chinese aphorisms into poetic English. The brightly-lit room is decorated in muted green, orange, and gold from the immense hand-woven carpet to the intricate gilded molding dressing the tall ceiling.

Sitting directly across from me, on the long side of the traditional horseshoe seating arrangement, are four of China’s top Ministers (all male) in various stages of slouch. My side of the horseshoe — also all men (besides me) — the American delegation of policy and business leaders are intently focused on Xi’s remarks about bringing positive energy to US-China relations.

Looking down my row, I can’t help but notice, flat on the floor, six pairs of identical black leather lace-up shoes pointing outward in unison. These conservative shoes are part of the standard uniform of the East coast businessman. As I glance across the vast carpet at my Chinese counterparts’ shoes, each pair is distinctly different.

They say you can tell a lot about a man by his shoes. In the Journal of Research of Personality, recent research shows that people can accurately judge 90 percent of a stranger’s personality by their shoe choice. Could I gather some fresh perspective on these leaders through their sartorial decisions?

China is a land of symbolism. One must sift through the bureaucrat-speak of a Chinese official, listening carefully for the one or two phrases that deviate from the standard litany to suss out the meaning in any meeting. The Chinese language, both written and spoken, richly lends itself to visual and oral puns. For example, the Chinese word for apple, Pingguo, is similar to the word for peace, Pingan. Thus an apple serves as a visual representation of peace. During the Cultural Revolution, wearing a part on the right side of one’s hair could result in harsh punishment for being a “rightist” or counterrevolutionary. Still today, few Chinese men part their hair to the right or to the left; it is brushed straight back or over the part. Shoe choice is a subtle signal sent by the man wearing them.

Even the selection of our meeting room in the vast People’s Hall, which houses rooms named after all Chinese provinces, was ladened with symbolism. The ornate Fujian Room is an interesting choice for this simply attired President who launched China’s current austerity campaign to keep the Communist Party on par with the everyday people. Yet it is President Xi’s preferred meeting spot with foreign guests. The Fujian Room was named after one of the four provinces where Xi served in office, and was also a favorite of Chairman Mao; perhaps this is why it is Xi’s favorite?

Xi Jinping has a reputation as a practical man who thinks big. He has consolidated power faster than any Chinese President since Deng Xiaoping, yet still has significant challenges ahead in implementing his ambitious reform agenda. Xi’s shoe style reflects his get-to-work attitude — leather shoes with faux laces. No wasting time with real laces; just slip them on and get to work.

Premier Li Keqiang’s shoe of choice is a Chinese Hush-Puppy style, but, by contrast, he takes the time to lace them. These comfortable brogues match the quiet technocrat personality of the Premier. An accomplished economist, Li speaks perfect English, is engaging in meetings, but prudent and technical in his work style. Hence the precise bows tied in his laces.

One of the most powerful men in China is Wang Qishan, leader of the campaign to catch “tigers and flies” — or the powerful and the low-level corrupt officials. An academic by training, banker by practice, and an economic visionary, Wang’s style is simple, black polished leather. Though these banker shoes shod his feet in public meetings, it’s a well-known secret that he prefers China’s traditional cloth slippers when not in formal settings. Wang is a practical man known as China’s “fixer.” Brought back from exile to handle the SARS crisis in 2002, Wang kept China’s economy growing during the global financial crisis in 2008, and now is critical to Xi’s ability to implement his agenda.

Vice Premier Wang Yang oversees China’s trade relationship and economic engagement with the United States, among other critical issues. This is a new field to him, and he is following the policy lead of his predecessor, the aforementioned Wang Qishan. What shoes does he wear? Wang Yang follows the fashion trend of his Big Boss. Like the President, Wang Yang selects slip-on leather shoes with faux laces. Whatever his intentions, these shoes signal that it is unlikely that Wang Yang will get out ahead of his boss — either politically or sartorially.

The analytical technique holds up with China’s Cabinet as well. The Foreign Minister, Wang Yi, sports highly polished, Italian leather lace-up shoes that could compete with a global investment banker’s. They complement his dapper, fitted suits and bright ties. Everything about Wang Yi is organized, put together, but cautious. After all, his goal is to make the foreigners feel comfortable.

The Finance Minister, Lou Jiwei, is an academic. He selects comfortable, well-worn, slightly scuffed lace-ups — as close to a tennis shoe as possible for a senior official. A cerebral man, Lou cares more about his economic agenda than his attire. His 1970s style suits drown his tall frame. The Commerce Minister, Gao Hucheng, tends to favor non-descript, simple but neat black lace-up shoes. As an economist, he does nothing rash — in action or attire — nor does he wish to stand out.

So can you judge a Chinese leader by their shoes? “Shoes convey a thin but useful slice of information about their wearers,” the authors from the Personality Journal write. “Shoes serve a practical purpose, and also serve as nonverbal cues with symbolic messages.” In the competitive landscape of predicting Chinese politics, any little advantage helps.