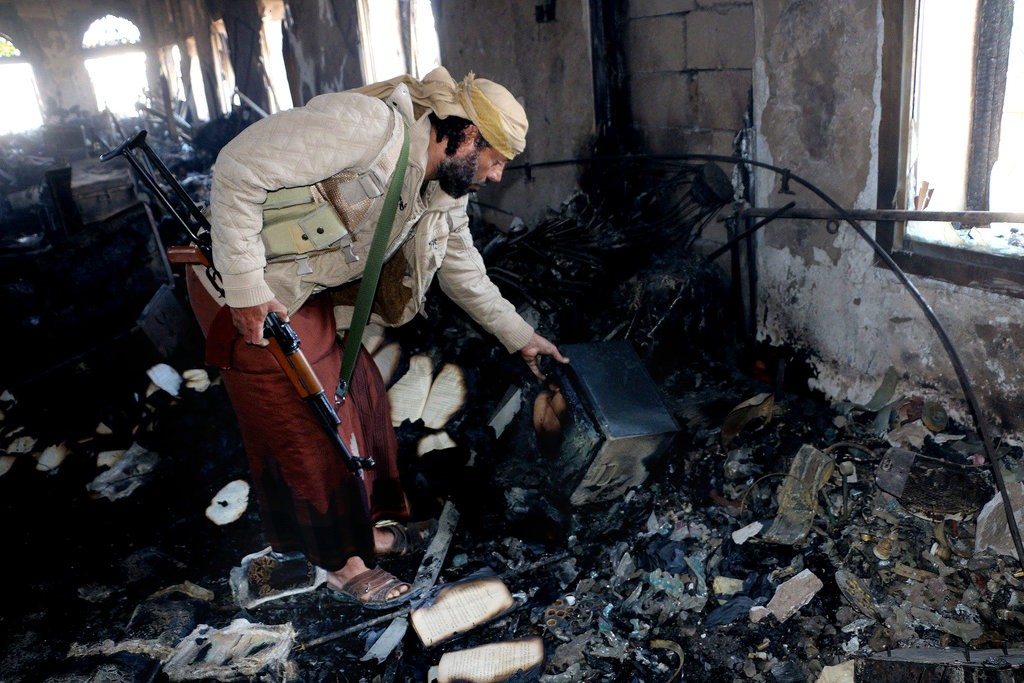 Yemen’s deputy culture minister, Abdulhadi al-Azazi, remembers standing two years ago amid the rubble of a national museum in his war-torn hometown, Taiz.

Objects he had admired as a youngster — ancient limestone carvings, gilded Torah scrolls, bejeweled Islamic daggers, a spindly 2,500-year-old mummy — were missing amid the charred debris and shattered display cases.

“The museum was wrecked and everything was stolen,” he said in a telephone interview. “Everywhere in our country we see the same thing happening now.”

Some four years into a civil war in which members of a Northern Yemeni faction known as Houthis have fought Saudi-backed Yemeni forces to a stalemate, the extent of the human suffering has drawn global attention. Less noticed have been the cultural institutions and archaeological relics lost or ravaged during the conflict, including thousands of antiquities taken from Yemen’s museums.

In an effort to recover some of the items, Yemeni officials visited Washington and New York in recent days to ask the Trump administration and the United Nations to help them forestall the scattering of a heritage that stretches back nearly 4,000 years. Their central request is that the United States issue an emergency order that would bar the import of Yemeni artifacts that did not carry special documentation.

Typically, antiquities from abroad cannot enter the country without documentation mandated in one-on-one agreements between the nation of origin and the United States. Because Yemen is not party to any such agreement, its artifacts simply need to be declared at customs in a routine way.

The Saudi-backed Yemeni government hopes the United States will impose new rules requiring importers to show proof that the objects had been legally obtained. That proof could be in the form of a government authorization or documents proving that the items had a well-established provenance trail dating from before the civil war.

“Yemen was a cradle to many civilizations and a home to multle faiths, particularly Judaism, Christianity and Islam, which all thrived here,” Yemen’s culture minister, Marwan Dammaj, said in New York on Wednesday. He denounced the pillaging as “a gross affront to humanity at large.”

Restrictions on antiquity imports are usually painstakingly negotiated and require a petitioning nation to show proof of ongoing thefts, illegal excavations and illicit exports. Care is taken not to disrupt any legal trade in a country’s cultural heritage objects, or to interfere with museum loans and educational exchanges. Nations seeking the curbs must show they are working to crack down on black markets and safeguard their relics.

Nonetheless, the United States has in recent years issued emergency orders on behalf of Iraq, Syria, Libya and Mali. In the case of Syria, for example, Congress voted to impose the restrictions in 2016 after terrorist groups were found to be profiteering from the country’s antiquities to pay for weapons and recruitment.

The Yemenis say they have strong evidence that their artifacts are being sold off by Houthi fighters and by terrorist groups like Al Qaeda in the Arabian Peninsula and the Islamic State, which infiltrated the country during its current turmoil. To bolster those claims, Mr. Dammaj circulated a 290-page report in Arabic and English that details the looting at the Aden National Museum, the Taiz National Museum and the National Museum of Zinjibar.

The marble head of a horse, thought to have been created between 1,000 B.C. and 800 B.C., that was taken from the Zinjibar Museum in Yemen.CreditYemen Culture Ministry

Accompanying it is a catalog of 1,631 objects missing from the museums. The list includes items that stretch back into the depths of civilization in a region known as a vital early trading crossroads, including ivory figurines from the ancient Kingdom of Saba (the mythic realm of the Queen of Sheba); Roman-era golden coins and marble statuettes; and brass finials and Hebrew manuscripts from the many centuries when Jews populated what is now southern Arabia.

“It is clear that violent extremists are plundering our treasures and smuggling them overseas,” said Mr. Dammaj, who met with State and Treasury Department officials, American law enforcement authorities and United Nations representatives.

State Department officials said the agency is studying the request.

“It is important that we take steps now to prevent the further degradation of invaluable cultural property and heritage sites in Yemen,” the department said in a statement. “We want to help prevent malign actors from profiting from the looting, theft and sale of conflict antiquities.”

Also reported stolen from the Zinjibar Museum, this limestone sculpture is thought to date from 1000 to 800 B.C., during the time of the Kingdom of Saba.CreditYemen Culture Ministry.

Mr. Dammaj said Houthis have been arrested several times in the act of smuggling antiquities and have been seen ransacking cultural sites.

Although it is impossible to corroborate every allegation, independent groups that follow Yemen’s plight have also cited a Houthi role in the sacking of some cultural sites. Mwatana, an independent Yemeni human rights group, has cited those forces in the looting of several museums, though it has also accused Saudi air forces of bombing cultural sites where they believed Houthi combatants had taken shelter.

Last month, the Malaysia-based Islamic Educational, Scientific and Cultural Organization assailed the Houthis for plundering manuscripts, historical texts and Islamic relics from the library of Zabid, Yemen’s capital during the 13th and 15th centuries.

Deborah Lehr, the chairwoman of the Antiquities Coalition, a Washington group that combats cultural racketeering and helped Yemen assemble and publish the English-language version of its report, said her group had been in contact with foreign archaeologists on the ground in Yemen who reported evidence of looting by the Houthi faction.