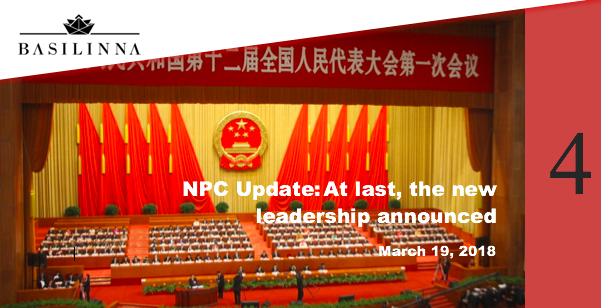 As we have predicted for the past few months, Wang Qishan was formally announced as Vice President this past weekend. His elevation, combined with the elimination of term limits on the Presidency and the Vice Presidency, were two of the highlights of the concluding National People’s Congress.

Vice President Wang is now ranked – per the organizational charts – as the second highest seated member of the government, but he is no longer a Standing Committee member of the Communist Party, not even a Central Committee member – just a “plain old party member.” Wang has also been given an important portfolio including economic issues as well as foreign policy, especially in relation to the United States. Yet, he does not have any of the bureaucratic infrastructure reporting to him – such as the foreign ministry – to help with the implementation. It will be Wang’s force of personality – as well as Xi’s imprimatur – that will allow him to do his job.

The other question that this positioning of Wang Qishan raises is the future government structure. There have been a lot of rumors around President Xi’s interest in downgrading the influence of the Standing Committee and its consensus building role in policy, and moving toward a more streamlined government structure of President and Vice President. The elimination of term limits on both of these positions combined with the new ranking of the Vice President’s role might be foreshadowing a more extensive government reform than just the restructuring of a few ministries.

As we predicted last week, the new line up of Vice Premiers holds no surprises. Vice Premier Liu He, although ranked number four, will have one of the largest portfolios. His responsibilities will range from finance and trade, to energy, technology, transportation, industry, and state-owned enterprise reform. He will also oversee U.S.-China trade relations, including the Joint Commission on Commerce and Trade (JCCT), and the Comprehensive Economic Dialogue (CED) (assuming it eventually is restarted). No wonder he turned down the role of the Governor of the People’s Bank. Yi Gang, the western-trained economist, will balance well with the low-key Liu He. Yi is already promising a fast start as PBOC Governor: promising a fast start as PBOC governor. "You'll see. There will be a series of reform policies between now and the Bo’ao Forum (April 8-11)."

Executive Vice Premier Han Zheng will oversee economic planning as the streamlined National Development and Reform Commission (NDRC) will report to him, along with the newly created Ministries of Ecological Environment and Natural Resources. MOFCOM, however, will report to Hu Chunhua.

Another question is what will happen to Yang Jiechi, former State Councilor for Foreign Affairs and foreign minister. Current foreign minister, Wang Yi, has been promoted to State Councilor, holding dual titles. As Vice President, Wang Qishan is expected to play an oversight role for foreign affairs; it is likely that Yang will take on the (weak) Chinese equivalent of the National Security Council. This firepower on the foreign affairs portfolio indicates the importance of international relations to the President.