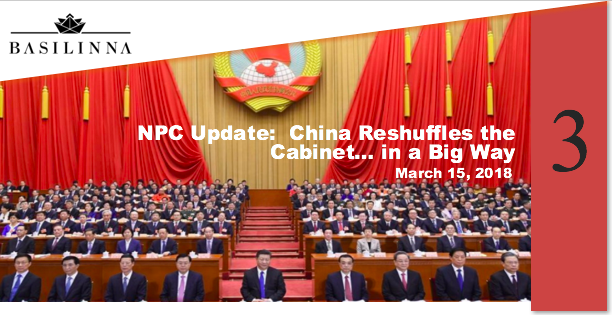 <ul><li>Significant restructuring of the government was announced this week at the National People’s Congress (NPC); biggest reform since former Premier Zhu Rongji’s in 1998.</li><li>Eight ministries and seven commissions were eliminated or streamlined to create 26. This structure reflects President Xi’s priorities, allows for better coordination, and reduces turf wars. The biggest changes included:<ul><li>Environment: Two new ministries created; one dealing with climate and pollution and the other with natural resources. </li><li>Finance: Merged the banking and insurance regulators into one.</li><li>Tourism and Culture: New ministry created to focus on these two priorities.</li><li>Other: Veteran’s affairs, immigration, and emergency management all became new ministries. A new market supervision administration was created to focus on anti-monopoly and pricing related issues. Also, there will be a new office for foreign aid which will coordinate the major Belt & Road Initiative.</li></ul></li><li>The powerful National Development and Reform Commission (NDRC) seems to have been the biggest loser: parts of its environmental/climate, pricing, anti-monopoly, and natural resources portfolios were moved to other organizations.</li><li>This restructuring also should promote more consistent implementation of central-level policies by the provinces.</li></ul>

Media headlines are focused on the lifting of term limits for the President and Vice President and what that means, as well as the big cabinet reshuffling, understandably. Yet, there are a few trends for foreign companies to monitor as part of their government relations strategies including:

We also see a rise in regionalism as a means to weaken the influence of provincial leaders and spur cooperation between a group of local officials, which reduces the possibility of corruption. There are three key regions that have been created: Xiong’an for the north (Beijing, Tianjin, Hebei), Yangtze River Delta in the east (Shanghai, Zhejiang, Jiangsu), and the Pearl River Delta in the south (Guangdong, Hong Kong, Macau) – and more ahead.