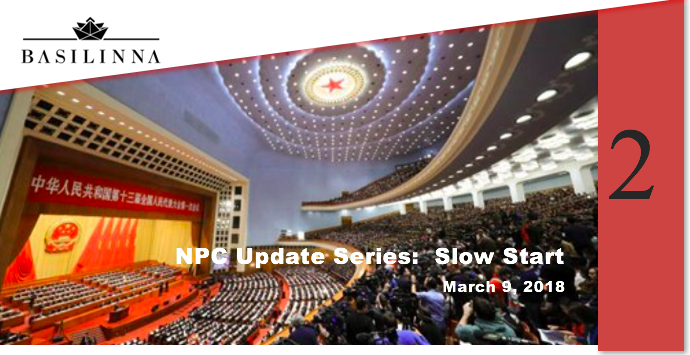 A Slow Start to the NPC

The 13th session of the National People’s Congress (NPC)—China’s nearly 3,000-delegate parliament—began on Monday, March 5th with an address from Premier Li Keqiang about the state of the economy. In it, he cited a GDP growth target of “about 6.5 percent,” and a commitment to managing macro-level financial risks. He also indicated that additional market opening measures will occur for foreign firms.

Many of the highlights of this year’s NPC will come in the second week: changes to the leadership of the State Council, restructuring and consolidation of the government ministries, and solidification of the role the Communist Party over all parts of society – legal, military, government, and general society.

In a move that prompted gasping commentary in the media, term limits will be eliminated for the positions of the President and Vice President. This action is important symbolically – and may indicate a consolidation of Xi’s power – but holds little significance in real terms. President Xi’s authority stems from his role as General Secretary of the increasingly predominant Communist Party; the Presidency is more titular. As General Secretary, he can decide his own foreign counterpart who could be another country’s President or Prime Minister. And as he has shown through his chairmanship of several leading groups, the small teams convened outside the formal government structure with select experts to formulate policy, that he can insert himself into any issue. Also, there are no term limits for how long he can serve as General Secretary – nor for his role as Chairman of the Central Military Commission, his other source of power.

In a politically savvy move, Wang Qishan retired from the Standing Committee, thereby maintaining the tradition of retiring from Party posts at age 70, but will be made Vice President, which has no age restrictions – and now, no term limits. Wang will continue to play an important role in the economy, especially the financial sector, and will take on U.S.-China relations, demonstrating the importance of these issues to President Xi.

Liu He is set to assume the financial and trade portfolios when promoted to Vice Premier next week, and rumors are that he will also be put in charge of the People’s Bank of China. There is precedent for holding both the position of Vice Premier and PBOC Chairman; Zhu Rongji, China’s most influential economic reformer, held both positions from 1993 to 1995.

Minister Liu was dispatched by President Xi to the U.S. just before the NPC. The purpose of the visit was to better understand U.S. intentions toward China on trade. Minister Liu met with the key economic team driving the China agenda for the Trump Administration. There were no announced breakthroughs, although they did establish a framework for continuing discussions, despite the fact that the President announced the increase in tariffs as the Minister and his delegation first met with the Administration. In addition, released by Presidential tweet, the President announced that they proposed to Liu He that China commit to reduce the $375 billion budget deficit by $100 billion annually.

On a side note, the designated spokesman for the NPC, former Ambassador to the United States, Zhang Yuesui, announced that the U.S. and China would be resuming their bilateral dialogue (but did not name which one). The White House later denied that the U.S. had agreed to restart any of the dialogues.

China’s reaction to the proposed increase on steel and aluminum tariffs has been muted. In part because they will not have a significant impact on China’s exports, and China is well aware that they need to address their overcapacity issue with these two products. More importantly, however, is their criticism that the United States has been willing to take this action outside the restrictions of the World Trade Organization. If they perceive that the United States plans to continue taking these type of retaliatory steps outside existing international trade rules, China may no longer feel obligated to adhere to them either. Any market opening measures, under this scenario, could be announced for all firms but those from the United States.