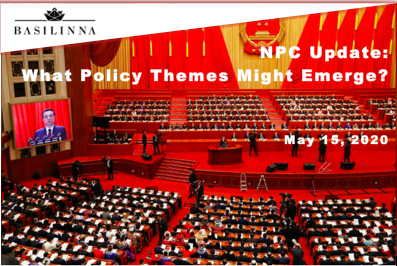 What to Watch For

The annual meeting of the National People’s Congress, China’s 3,000+ member legislature, will start on May 22 in Beijing. Delayed from March this year due to the coronavirus, the scheduling of the session – and holding it in-person – is a milestone for China’s resumption of business and return to normalcy. There is, of course, a massive effort to ensure health and safety. In the lead up to this convening, all delegates were instructed to monitor their temperature beginning on May 6, two weeks prior to the meeting. The duration of the session has also been reduced to seven days from the typical 10 days.

Post-COVID recovery will dominate the agenda; however, we also predict the session will showcase President Xi Jinping and his handling of the virus. One indicator of his standing coming out of the COVID war will be the proposed personnel changes that always happen after the NPC meetings. Already, we have seen several of Xi’s allies put into key positions. Some of the more notable moves include:

The Government Work Report, delivered by the Premier at the opening of the meetings, sets the tone for the legislative session and the year’s policy focus. This year, the report will include an overview of the economic health of the country, likely a victory lap on the government's containment of the coronavirus, and, perhaps most-watched, the setting of the economic growth target for the upcoming year.

One of the issues to watch will be if the target growth number is revised down from the goal of 6% or if China will take this opportunity to do away with this closely watched number. With last month’s announcement that China saw negative growth for the first time in four decades, it is unclear at this point how this all-important number will be handled. The IMF predicts China will only grow at 1.2% this year but could come roaring back next year with 9.2% growth. This assumes a lot of things, including positive global economic growth.

Other key happenings will include defense spending announcements, the release of the annual economic development plan, and the forecast report on the economy. There will be a list of laws for review and passage. And, the China People’s Political Consultative Congress (CPPCC) will meet concurrently, which is chaired by Vice Premier Wang Yang, the fourth-ranked Politburo Standing Committee member. With more than 2,000 members, the CPPCC is the other half of the “two sessions” that comprise the annual legislative meetings.

In the run-up to the Congress, the government has rolled out at least two new major policy themes that will anchor the policy proposals – and rhetoric – during the sessions.

Speculation has begun about what topics will lead the session and the agenda will be lengthy. Here are some potential themes that are likely to emerge: