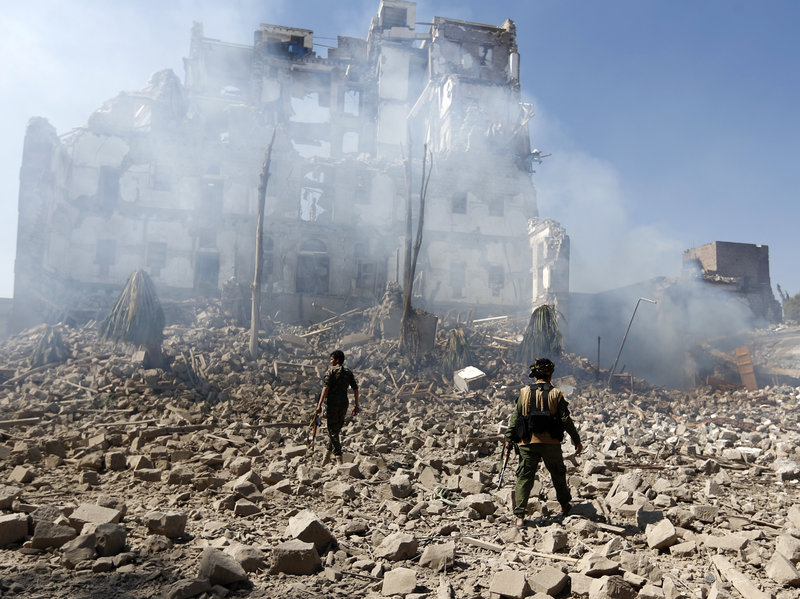 NPR: Yemen's Loss Of Antiquities Is 'Robbing Them Of Their Future'

In Yemen, tens of thousands of children have starved to death in a war led by Saudi Arabia that will soon enter its fourth year. Another 14 million — half the country's population — are at risk of starvation.

A November 2018 report from Save the Children estimates that 85,000 children under the age of five "have died from extreme hunger or disease since the war in Yemen escalated." The United Nations, meanwhile, has said the war in Yemen is the largest and worst humanitarian crisis in the world today.

Thousands of civilians have been killed, and in the backdrop of this bloodshed and destruction is another tragedy: the looting of the country's history. Its precious antiquities plundered by criminals and violent extremists.

Deborah Lehr is the founder and chair of the Antiquities Coalition, an organization that works to stop the trafficking of antiquities and preserve cultural heritage.. She co-wrote an op-ed in The Washington Post this week with Yemen's Ambassador to the United States, Ahmed Awad Bin Mubarak, about what the loss of antiquities means for Yemen's future.

‍
"There's no question that there's a humanitarian crisis and it's very tragic the loss of life and displacement that has taken place, but these items, these symbols really, represent their rich history, their religion and quite honestly, their economic future," Lehr says. "All of these are being taken away. The robbing of the past is really robbing them of their future."

Lehr spoke with NPR's Leila Fadel about what's happening in Yemen as these antiquities are taken from the country and what she has proposed with the ambassador to stop the loss of Yemen's history and culture.

This interview has been edited for length and clarity.

‍
·On how many antiquities have left Yemen

It's very hard to quantify because we don't even have legitimate numbers on the legal trade, but what we can say is that Yemen was a very rich, historic country. It was one of the centers of the spice and incense trade and in fact developed [as] the Manhattan of the desert, as a major trading center, with the first skyscrapers of the 16th century, and one of the first major dams in the 8th century B.C.

All of these have been targeted for destruction and we're losing significant amounts of what was really very rich history to these thieves. And then with the illicit digging going on, who knows what treasures have been lost. You've lost the context, so we may have lost information, for example, that could lead to the proof of the Queen of Sheba and her existence.

·On where the antiquities are going

With the illicit trade, what we have tracked is their exit points.They meet with sophisticated middle men and they're being bought by collectors and others in major Western markets. Some of it is even showing up in the United States. These monies are going back and being used by the Houthis and other terrorist organizations in the region. We have evidence of al-Qaida raids on some of the museums in Yemen and we have evidence in Europe, even in Brussels, of dealers who have been selling al-Qaida-sponsored antiquities. There's definite evidence of ISIS benefiting. In a special forces raid of one of the complexes of essentially the person who was the chief financial officer of ISIS, we found receipts of about $5 million worth of antiquities over the course of a year that were sold.

‍
·On how she proposes to stop the loss of antiquities

There are international rules that govern how we can actually stop the U.S. from being a target market, but it requires that countries are signatories to a 1970s UNESCO convention for antiquities. Unfortunately, Yemen is not, so we have to be creative in the measures that we take and we also need immediate action because of this crisis going on. What we have proposed is that [the Treasury Department] extend the emergency powers that they have under the Emergency Act and other legal means that they have to stop ... already with Yemen they can stop the import of oil — that they expand that to include antiquities because these items are being used to sponsor terrorism.

NPR's Sarah Handel and Cindy Johnston produced and edited the audio for this interview.