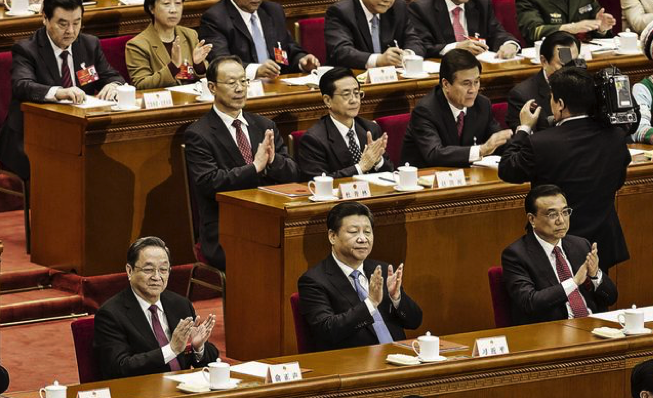 Each March, the National People’s Congress (NPC) and the Chinese People’s Political Consultative Conference (CPPCC) convene to approve the work plans for the next year in what is commonly known as the “Two Meetings,” or Lianghui. The NPC annual meeting brings together 2,980 deputies from the provinces, the military, and the central government in Beijing. Given the significant personnel changes over the past five years, almost 75 percent of the delegates will be new.

There is extra significance surrounding this year’s 13th NPC, running from March 5th to March 15th, because it comes after President Xi has solidified his leadership and the role of the party. There will be a new government line up approved, announced changes on government restructuring, updates on economic growth plans, and new measures for central-provincial relations.

Coming out of the 19th Party Congress, the Chinese identified “three major challenges” that need to be addressed in the coming five years. The “work plans” for overcoming these challenges will be discussed at the NPC. Expect to hear these themes repeated over the next year:

§  Risk Management: Expect an emphasis on managing risk: especially financial risk. There is a focus now on    aiming for quality economic growth, not quantity, after decades of double-digit GDP growth. There are also    concerns about corporate debt, as well as municipal debt, that need to be addressed. China has also    identified its large trade surplus as a risk that needs to be addressed (and is the mirror concern of the United    States).

§  Poverty Alleviation: In order to achieve a ‘moderately prosperous society’ by 2020, the government is    putting a major emphasis on bringing all Chinese citizens out of dire poverty. Urbanization has helped China    lift over 700 million people out of poverty in past decades, but with over 30 million citizens still below the    nation’s poverty threshold, much work remains.

§  Environmental Protection: While many benefited from China’s runaway economic growth for decades, it    took a huge toll on the environment and has become a source of unrest with the population who have    suffered smog, tainted food, and unclean water. Environmental protection and clean up has become part of    the work plan for Mayors, Governors and other officials.  A major push on green finance combined with a    crackdown on polluting factories has already resulted in the development of nascent market mechanisms to    promote both energy efficiencies and environmental clean-up.

In addition, there will be a continued focus on cleaning up the Chinese Communist Party to build credibility, as well as creating the means through which to govern the country. As reiterated in the 3rd Plenum Communique released on February 28, the Party’s role will be elevated above all other institutions and have oversight on their activities.

As part of this effort, a new entity is being created to oversee all anti-corruption efforts:

The National Supervision Commission (NSC) would exert unique authority to oversee all personnel who exercise public power. This is the strongest supervisory measure to date, as its jurisdiction would reach beyond CPC members. NSC operations are already being established at local levels.

While much of the NPC’s activities are formulaic, there are a few key outcomes to follow: