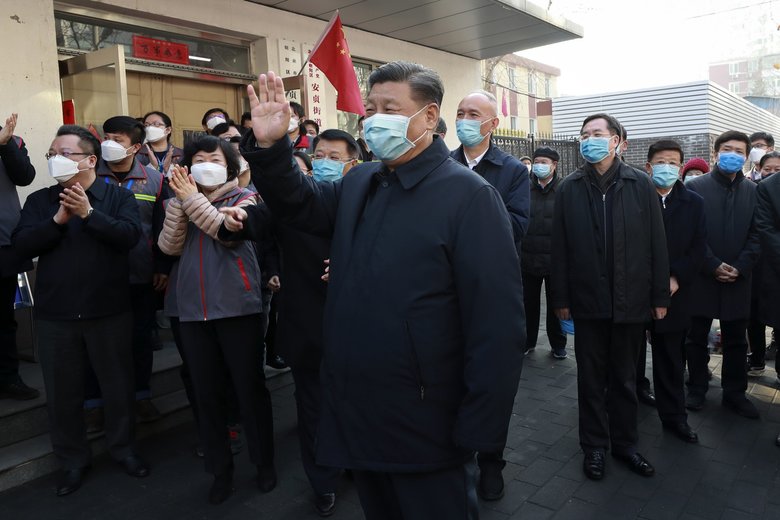 China is showing many signs of recovery and the mood is steadily improving. Unfortunately, their recovery comes as the U.S. and the rest of the world are now suffering from this global pandemic. China’s recovery will be hampered by the shutdown of business, travel, events, and slowing consumer demand internationally.
‍

Given how little is known about COVID-19, there is also the very real possibility of resurgence in China. Getting the country back to work in a way that keeps the disease contained will be an art rather than a science.

President Xi traveled to Wuhan earlier this week sending a strong signal that China is recovering. He toured hospitals, met those on the front lines of the “anti-virus war,” and talked with recovering patients by video link. He mainly delivered inspiring words attributing the success of China’s efforts to the Chinese Communist Party. China watchers have been closely monitoring the timing of a trip as one of the key signals that the virus is contained – and more reliable perhaps than the numbers.

As of yesterday, there were only eight new cases  reported in China – all but five were in Hubei.

According to China’s State Council Information Office, as of March 13, over 95% of scaled industrial firms (except in Hubei Province) have returned to work; 60% of SMEs have resumed.

‍
Foreign direct investment into mainland China fell 8.6% year-on-year in the first two months of 2020 due to Coronavirus.

‍
The Chinese government is working to address its global image in the wake of the virus outbreak. The rumor mill is swirling with all sorts of theories about how the virus did not actually originate in China, but rather was brought in by the U.S. While no one yet knows for certain where the virus did originate, China was the likely site of the first mass outbreak, and they sat on the news for a little too long before instituting extensive – but seemingly effective – containment measures.
‍

China is stepping up and sharing its experience and expertise internationally as the rest of the world grapples with containment. On Wednesday, the Red Cross Society of China sent a delegation of experts with medical equipment and supplies to Italy – at their request – to help contain the virus. They have provided assistance to Iran and Iraq as well.
‍

The Chinese government will also have to weigh instituting their own international travel bans as cases of imported coronavirus begin to show up from overseas. Earlier this week, Shanghai reported two cases that came in from Italy. China had expressed diplomatic outrage when the U.S. moved to ban Chinese travelers from entering the U.S. early on, but as cases rise here, it would be no surprise to see China limit travelers from the United States.

We reported last week on several measures to help foreign companies in China, including exemption from the social stability payments. In a call with the AmCham Shanghai members this week, Vice Minister of Commerce, Wang Shouwen, announced that China will work to shorten the negative list on foreign investment. Last year, the Chinese government reduced the number of sectors that are not open to foreign investment from 48 to 40. In 2018, it stood at 63.
‍

Wang also said they would work to encourage financial institutions to increase foreign trade loans to cope with the impact of the epidemic and maintain strong levels of foreign trade and investment.
‍

As we noted previously, there are very positive signs coming from the Chinese government about moving forward with the commitments in the Phase One trade deal, including moves to create openings for beef and poultry and accepting MasterCard’s application to operate in the market. Yesterday, the China Securities Regulatory Commission (CSRC) announced that foreign ownership limits for securities firms would be lifted as of April 1, 2020 – ahead of the December 2020 commitment. And, in a few days, China is scheduled to release the plan for strengthening intellectual property rights protection per the agreement.
‍

What is in question are the major purchasing commitments. China has pledged to buy $200 billion in goods over two years. Bloomberg reported that the U.S. may be willing to show flexibility in meeting these commitments with the provision that imports do not surge once production is fully restored. White House officials have publicly stated that we are on target to meet the purchase targets.
‍

There are also growing calls for President Trump to lift tariffs which would send good signals to Wall Street and provide some pricing relief to consumers. The U.S.-China Business Council and several think tanks have been pushing for tariff reductions as a way to help both economies weather the storm. The U.S. currently has 25% tariffs on about $370 billion worth of Chinese imports. On February 14, China cut tariffs from 10% to 5% on $75 billion worth of U.S. goods.
‍

The coronavirus could make or break the careers of Party officials. We saw Vice Premier Wang Qishan ascend rapidly for his adept handling of the SARS virus when he was plucked from obscurity in Hainan Island to become the Beijing mayor and put in charge of the nation’s effort to fight the disease in 2003.
‍

We are now keeping our eye on newly appointed Hubei Party Secretary Ying Yong. Ying is considered a member of the “New Zhejiang Army”, a term denoting President Xi loyalists who served with him in that province. In February, he was moved from Shanghai to Hubei to handle the outbreak in a major vote of confidence and test of leadership.
‍

We are also watching Wu Zuyun, Party Secretary of Qianjiang City, Hubei Province. Qianjiang is a city of about one million people a few hours outside of Wuhan and has largely been spared from a major outbreak due to the quick actions of Secretary Wu. Bill Bishop of Sinocism reported that Wu learned about a new virus affecting citizens during meetings in Wuhan in January and decided to immediately quarantine all patients in his city showing symptoms. Secretary Wu has steadily risen through the Party ranks in Hubei since 2003. Wu is worth watching as a potential rising star in the Party.
‍

And, the media widely reported that Wang Huning, a member of the seven-man Standing Committee of the CPC Politburo and a member of the Secretariat of the CPC Central Committee, accompanied President Xu on his Wuhan inspection tour. Wang almost always accompanies President Xi – internationally and domestically – and is one of his most trusted advisors. He is likely to remain in that role as he will not be hitting the Party’s unofficial retirement age by the next round of leadership changeover in 2022 and 2023.