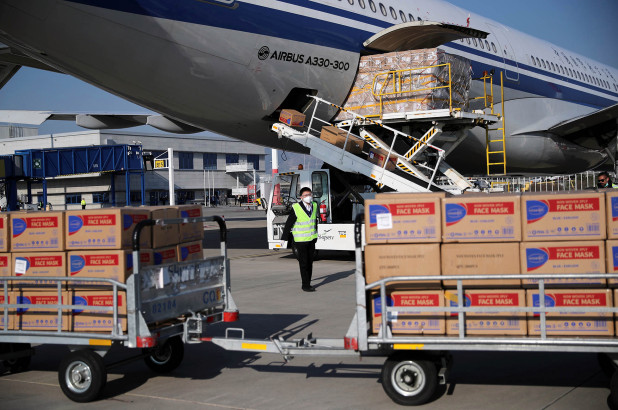 China is moving into virus recovery mode and balancing the return to work with the risk of a resurgence in COVID-19 cases. As such, they are using their experience and restored capacity to help other countries as the virus spreads. The Chinese government has sent equipment, supplies, and experts throughout Europe over the past few weeks, for example. But this effort is raising political sensitivities globally.

Are we or are we not accepting Chinese charity?

China’s global reputation is on the line as the world decides how it feels about Chinese charity in response to the worldwide spread of COVID-19. How they navigate their global recovery response could impact their global standing for decades to come.

‍
On Sunday, it was reported that the U.S. military airlifted health supplies from Shanghai to the U.S. in just one day. Typically, these supplies would be shipped by boat taking 37 days.

‍
What was not as widely reported until the following day was that the supplies, which were largely contracted from sources throughout Asia, included a donation of masks and personal protective equipment (PPE) from Huawei, perhaps the most politically controversial Chinese company in all the land. New York Governor Andrew Cuomo confirmed Huawei’s donation in a tweet. Huawei has become the symbol of China’s rise in tech and its threat to the global 5G system. Alibaba was another Chinese company that contributed masks and gear. There are supposedly 19 more shipments of equipment being rushed to the United States in this unprecedented airlift operation.

‍
By contrast, in Europe, several countries are having to reject Chinese protective supplies and testing kits due to substandard quality. The Financial Times reported that Dutch health authorities had to recall 600,000 Chinese made masks because they were defective. Spain and Turkey have recalled or not distributed high numbers of defective test kits as well.

‍
China may also be suffering from substandard test kits. It was reported last week that there were resurgent cases in Wuhan in patients who had previously been deemed recovered. No one knows exactly why recovered patients are testing positive, but one theory relates to the low accuracy rates of the nucleic acid tests China has deployed.

‍
It will be important to watch for any quality issues with the airlifted supplies in the U.S. They are desperately needed in places like New York and New Orleans. There is concern already about the virus spreading from China. If this PPE does not meet U.S. standards or is found to be defective thus putting our health care workers, who are being deemed heroes, in danger as a result, we could see a much more serious and sustained backlash against China. It could also lead to a resurgence in the negative quality connotations around “made in China” as China works diligently to rebrand that term into a symbol of Chinese innovation through its massive industrial policy of the same name.

‍
Will COVID-19 be branded the “China virus” or not?
‍

Early last week, President Trump and Secretary of State Pompeo pushed back hard on the controversial tweet from the Chinese Foreign Ministry spokesperson, Zhao Lijian, calling into question where the virus originated and planting the seed that it could have been introduced by the U.S. military. While Cui Tiankai, China’s Ambassador to the U.S., tried to distance himself from the tweet, such a tweet would typically be preapproved by the Chinese government and thus looks official. The spokesperson has since backed down.

‍
In response to that tweet, President Trump started referring to the coronavirus as the “China virus” and Pompeo pushed for the virus to be officially referred to as the “Wuhan virus” in a G7 statement following the meeting on the coronavirus held last Wednesday. However, after a productive call with President Xi on Thursday, the President’s tone changed:

Just finished a very good conversation with President Xi of China. Discussed in great detail the Coronavirus that is ravaging large parts of our Planet. China has been through much & has developed a strong understanding of the Virus. We are working closely together. Much respect!”, President Trump tweeted.

‍
This rapid back and forth on the Trump Administration’s China messaging is nothing new; we saw rapid swings in the President’s tone during the trade negotiations too. However, this volatility underscores the controversy emerging around what Josep Borrell, EU high representative for foreign policy, dubbed China’s “politics of generosity” referring to China’s aggressive push to position themselves as the solution to global recovery efforts to shift focus away from the virus’s likely origins in their country.

‍
Chinese donations have become a minefield littered with political and quality concerns. For example, after the President and Secretary made their remarks, it was rumored that the Chinese government retaliated by putting a stop to Alibaba founder Jack Ma’s massive donation of masks and virus test kits by halting his second shipment of the supplies.

‍
Anecdotally, we have heard that Chinese companies were becoming concerned with how to best get donations to the U.S. and where to make them. They have more limited experience in overseas charitable contributions.

‍
The Chinese efforts at charity stand in stark contrast to U.S. efforts to help China while in the throes of the pandemic. U.S. companies have well-established channels for providing charitable support in China and the Chinese Embassy in the U.S. stepped up to coordinate all charitable giving. Chinese companies, however, are newer to providing global charity and are having to find their way. Oftentimes, the most effective routes will be reaching out to the state and city levels of government, which are on the frontlines of the battle.

‍
How to gauge if the Phase One trade deal is holding up?

‍
After his phone call with President Xi last Thursday, President Trump said, "This whole invisible enemy has taken over the world. Nobody cares about trade." However, throughout last week, the U.S. Chamber, U.S.-China Business Council, and other major business associations pushed the President to lift the tariffs arguing that this measure could help stabilize the economy. President Trump initially rebuffed those calls but the Administration is now accepting public comments on the removal of tariffs on medical equipment and defending itself against calls that the overall tariffs are additionally taxing the economy.

‍
As for the Phase One trade agreement, it could become a challenge to monitor implementation without the ability to meet in person. The agreement provided a detailed structure for enforcement and dispute resolution: monthly meetings at the working level, quarterly at the deputy level, and biannually at the principal level. Any disputes get fast-tracked to the principals. Without being able to travel to China to meet counterparts in person, it will be difficult for the U.S. to verify what has and has not been implemented. What we do have, however, is U.S. companies on the ground that can help gauge progress – to the extent they have the bandwidth to report infractions and progress.

‍
Yet there were again good signals last week with China’s approval of Goldman Sachs' and Morgan Stanley’s applications to increase their ownership in their joint ventures to 51%, and remain committed to the April 1 deadline of allowing 100% ownership of securities firms, which was one of the key commitments to open the financial sector. Also, the two sides were able to reach some agreement on agriculture through the dispute settlement measures.

‍
We remain optimistic that the Chinese government is eager to court foreign companies, and that there is a significant opportunity now to pursue projects and approvals. The Chinese have not shown any indication of backing away from their committed purchases of U.S. products. Chinese ministries are responsive and getting back to work so this is a good time to engage.