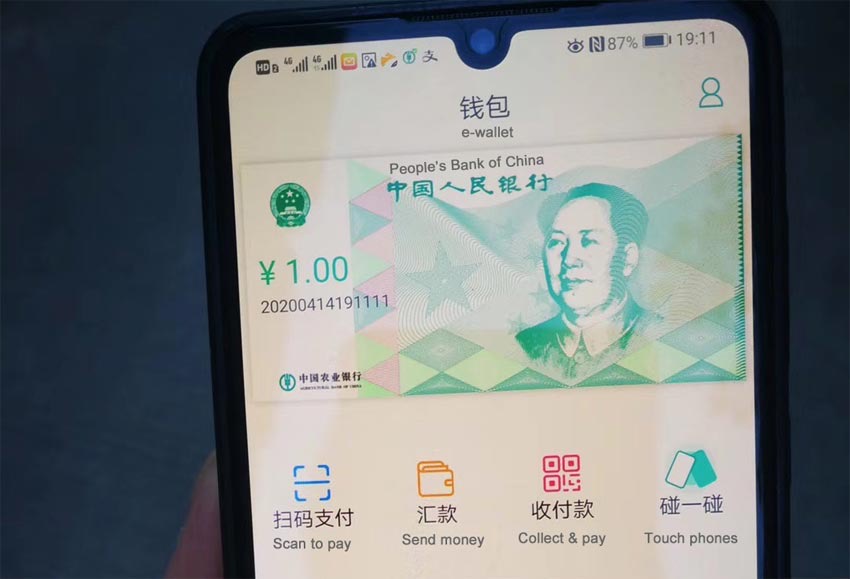 China is the first major country to issue a central bank-backed digital currency. A main driver of the currency launch is to reinvigorate the economy, but it is also intended to spur on a couple of President Xi Jinping’s top policy priorities, including financial inclusion and promoting the RMB internationally.

The plan to expand China’s digital currency into overseas markets to support trade transactions has prompted U.S. experts to debate its merits as a competitor to the dollar as the main currency for international transactions as well as assess whether it could be a threat to the dollar’s position as a reserve currency. Until the RMB is fully convertible, however, the digital currency will not threaten the dollar’s status in the short term, rather it will essentially function as a payment system overseas, hence the name Digital Currency/Electronic Payment (DC/EP).

Although the development of the DC/EP has been under consideration since 2014, China’s central bank only launched pilot projects this year. The digital currency is being promoted by the People’s Bank of China (PBOC), China’s central bank, to replace cash transactions. Development of the DC/EP also gives the central bank greater transparency into – and control over – the movement of “cash” – which helps on a variety of fronts, including fighting financial crimes, facilitating targeted monetary policy interventions, supporting poverty alleviation and financial inclusion, and enabling the breakup of Tencent and Alibaba payment system monopolies, which have been in the news lately with the announcement of draft anti-monopoly rules for internet companies.

How Does It Work?

In many ways, the user’s experience is no different than using the WeChat Pay or Alipay systems: users download digital wallets in which they can store their funds, and generate a QR code that can be scanned by payment terminals at retail locations. The wallets are linked to your mobile phone statements or bank accounts.

To make DC/EP function more like cash, the PBOC invented a system called “loosely coupled account links.” In traditional electronic payment systems, a transaction can only happen between two bank accounts; in the DC/EP system, transactions can happen between two DC/EP wallets. This direct transaction functions like cash because it removes financial intermediaries, such as banks, credit cards, and fintech giants, from the transaction. The main difference between the existing payments systems and the DC/EP is that it is backed by the central government.

Where Is Digital Currency Being Used?

Under the leadership of the PBOC, this August, the Ministry of Commerce (MOFCOM) announced that digital currency would be piloted in Shenzhen, Chengdu, Suzhou, and the Xiong’an New District. In Suzhou, CCTV reports that some government officials are now receiving their salaries in the DC/EP. Companies providing consumer services, such as Didi (ride-hailing) and Meituan (food delivery), also have been involved in the pilots. DC/EP will be used at the2022 Winter Olympic sites in Beijing and Zhangjiakou. The next stage is to expand to pilot programs in regional clusters. Once the domestic pilot programs are completed, China intends to use its digital currency in overseas markets.

The State Council reconfirmed in October that they plan to carry out an “internal closed trial” to promote digital currency research, application, and cooperation with the global community.

How Could It Impact Global Firms?

China’s newly announced five-year economic growth plan includes plans to digitize China’s economy and promote Chinese technological capabilities overseas. As China’s overseas trade grows, so does its interest in using the RMB as the currency-of-choice, but it is hampered by the fact that it is still not a convertible currency. By promoting the use of a digital currency backed by the government, foreign firms will be able to transact in RMB as opposed to the traditionally used U.S. dollar.

While the use of the DC/EP may increase in international transactions, it is not a threat – at least in the short term – to the dollar’s position as a reserve currency. The challenges of becoming a reserve currency are the same as those of becoming a regular currency. Former Treasury Secretary Hank Paulson outlines what China needs to do to overcome these challenges in a recent piece for Foreign Affairs, including instilling confidence in the government, adopting a more market-driven economy, improving financial market regulation, and earning the respect of international investors.

Foreign firms will benefit from the use of the digital currency in China, just as they have with the adoption of the WeChat Pay and Alipay payment platforms, but it is less clear how the firms will benefit overseas from the DC/EP. If the Chinese government requires the use of this digital currency, it will create competition for the use of dollars for transactions overseas so it may make it easier for international firms selling to China to conduct business by allowing them to bypass the dollar in the overall transaction process.