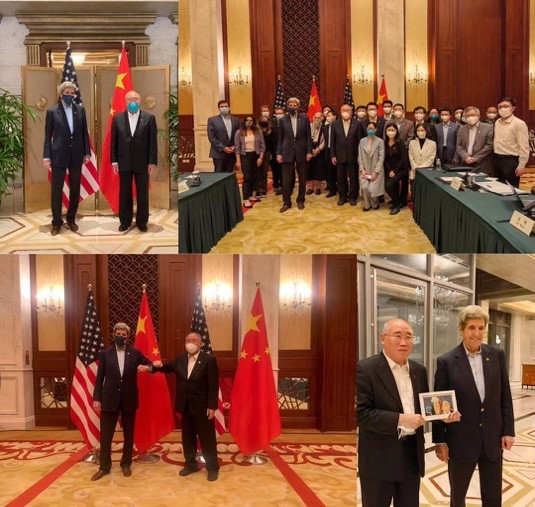 U.S. Special Presidential Envoy for Climate, John Kerry, visited Shanghai from April 14 to 17 to “raise climate ambitions” ahead of President Joe Biden’s Leaders’ Summit on Climate to be held virtually from April 22-23, and the U.N. Climate Change Conference of the Parties (COP26) later this year.

Kerry spent two days in closed-door talks with his Chinese counterpart, Xie Zhenhua, and, more importantly, got a virtual meeting with Chinese Vice Premier Han Zheng. The Vice Premier, who ultimately owns China’s climate portfolio, is at a much higher level than State Councillor Yang Jiechi and Minister Wang Yi, who met with U.S. Secretary of State Anthony Blinken and U.S. National Security Advisor Jake Sullivan, which is a strong indication of the importance of exploring climate cooperation. No media events were held, but the visit concluded with a joint statement addressing the climate crisis. We are still waiting for a final commitment that Chinese President Xi Jinping will attend President Biden’s April Summit.

The familiar refrain about climate being one of the only areas of potential bilateral cooperation was reaffirmed by Kerry’s trip’s relative success and productivity; however, China made a point to remind the U.S. team that cooperation on climate is not without its challenges. Kerry’s visit to Shanghai may have struck a more conciliatory tone – or at least served as an immediate pressure valve for the tense bilateral relationship – but China is striking a more assertive and confident stance across the board as well as on climate by reminding the U.S. that they have relationships with U.S. allies too. In the near term, though, we will be watching whether or not President Xi attends President Biden’s climate summit later this week. All indications so far are that they are leaning toward attending, but the official announcement is pending, so they are building up the suspense and milking this for all its worth.