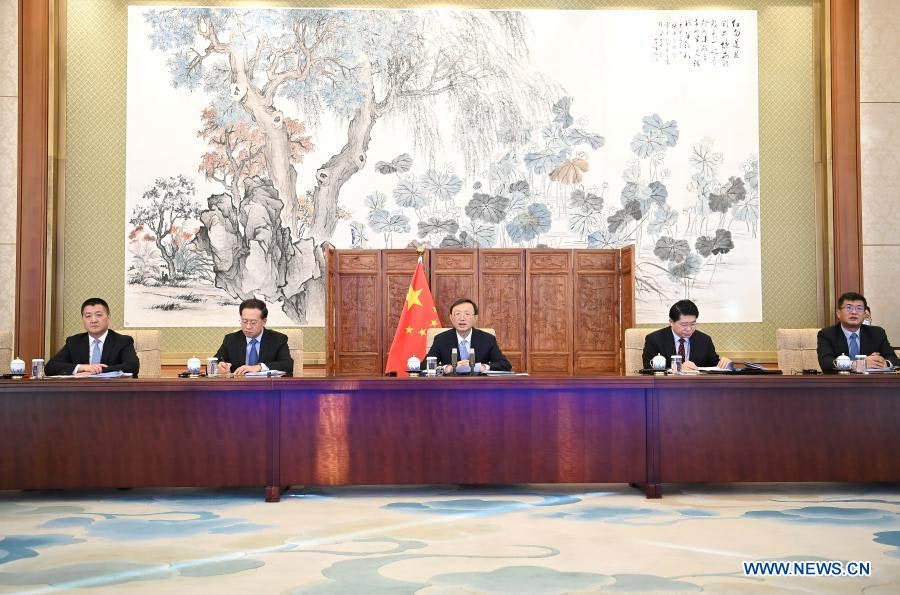 Earlier this week, we shared our thoughts on early indications of Team Biden’s China policy. Today we are focused on China’s perspective. There, officials are expressing their commitment to a “win-win” strategy with the U.S., reaffirming their “redlines” and deriding the Trump Administration’s “misguided” policies.

China is also moving forward with its “New Development Course for China” set forth by President Xi, which hinges on building up domestic consumption, but also includes social goals that interestingly overlap with some of the Biden Administration’s own domestic goals, like addressing the income inequality gaps. And as tech will remain a core area of bilateral tension and competition, and China is now an innovator, China is getting serious about IPR protection. See below for our quick take on a few notable developments in China over the past couple of weeks that you might have missed.
‍

On Monday evening, the National Committee on U.S.-China Relations hosted a speech by State Councilor Yang Jiechi, China’s top diplomat. Yang is the first senior official to make remarks on the U.S.-China relationship since President Biden took office less than two weeks ago. His speech for this American audience was delivered in Chinese despite his perfect command of English – he started his career as an interpreter for Deng Xiaoping. It was rigid, official, and offered no olive branches or warm and fuzzies – despite offering privately to come to the United States for talks.

“Some in the Trump Administration misjudged China’s intentions,” Yang said. “China is not a competitor to the U.S. globally, nor is it an adversary. China’s leaders seek “win-win” policies and are committed to opening up.” But, he noted, “the development of China is a process that no one can hold back.” He called upon the Biden Administration to lift the blocks on people-to-people exchanges, such as the restrictions on Chinese students, media, and companies. He identified areas of cooperation too, such as health and pandemic control and climate change; the same areas offered up by the Biden team.

Despite his senior stature, Yang’s message was consistent with the messages shared by the Chinese Ambassador to the U.S., the spokesperson for the Ministry of Foreign Affairs, and others in the government since the Biden election. President Xi delivered remarks at the World Economic Forum last week that garnered a lot of press coverage using much of the same “win-win” language and global citizenship approach they have been using.

So far, their opening salvo at the Biden team has not included any “gifts” to improve the atmosphere, such as major purchase announcements; given that they have only fulfilled about 58% of their commitments under the Phase One trade agreement, which is under review by the Biden Administration.
‍

China has a world-class set of intellectual property protection legislation, but the problem has always been enforcement. We have always said that China will only get serious about enforcement when their companies need protecting, and that time could be now. President Xi has now emphasized the importance of strengthening I.P. protection and enforcement, which he made in remarks during a Politburo study session on IPR protection. This is part of Xi’s New Development Course introduced in 2015. As China ramps up its R&D in an effort to win the competition to dominate the technologies of the future, protecting I.P. seems to be a real priority. “Only by strictly protecting IPR can we effectively protect core technologies that our country has developed indigenously,” Xi said. He also noted that IPR regulation had not kept pace with technology.

IPR has long been an irritant between China and most innovating nations. China made IPR protection pledges in the Phase One trade agreement and ramping up enforcement benefits the U.S. as well. It is a good signal for foreign and domestic business as well as addressing a key bilateral issue.


The WHO in China

The WHO is on the ground in Wuhan investigating the origins of the COVID-19 outbreak. They have visited the infamous market as well as the nearby virus research lab that some in the Trump Administration claimed was the actual source of the virus. There is little expectation that they will definitively pinpoint the source given that it has been more than a year now since COVID was first detected, nor will they identify a smoking gun; however, this trip is important as the U.S. rejoins the WHO. President Biden made a big show of rejoining the WHO upon entering office. And while the whole world is watching this process and will scrutinize the finds, the Biden Administration will need to respond, which could spark further tension in the bilateral relationship. After some initial delays with the delegation and refusing entry to two of the members who test positive for an antibody, the WHO is stating that the Chinese are being cooperative and providing additional information during the visit.

Further, this issue of origin remains on the radar of the Biden Administration. White House spokesperson, Jen Psaki, said last week that the Administration has concerns about the spread of misinformation by “some in China.” She noted that it is imperative that the origin of the virus was identified as well as understanding how it spread globally. Her comments led to the usual outrage by Chinese foreign ministry spokesperson, Zhao Lijian, who said the U.S. should respect facts, science, and the WHO’s findings.
‍

In a surprising move, Zheng Zeguang, former Vice Minister of Foreign Affairs, replaced the bombastic Liu Xiaoming as Ambassador to the U.K. after his 11-year tenure. Zheng was widely considered the likely replacement to Ambassador Cui Tiankai in the U.S., who has served for more than eight years now and is due for rotation. No speculation yet on who will replace Cui.

Last week, Minister of Commerce Zhong Shan retired, and it was announced that Vice Minister Wang Wentao would become the new Minister and Party Secretary. Wang is a rising star in the Chinese system, having served posts in provincial governments. He also spent more than a decade working at Shanghai’s aerospace training institute, which continues the trend of rising officials from that industry. We count at least three officials from the aerospace and space programs who now hold senior-most positions in the provincial and central government ranks, including the Party Secretaries of Zhejiang, Liaoning and Hunan, the Governor of Guangdong, and the Vice Governor in Anhui.

Also noteworthy is the massive rotation in the provinces that has been taking place over the past year. Almost all of the leadership at the provincial level – Party Secretary and Governor – have changed since 2018 -- one-third since 2019 alone. Macro Polo has done an excellent analysis of the rotation and how the changes indicate China’s rising stars leading up to China’s leadership changeover coming up late next year.