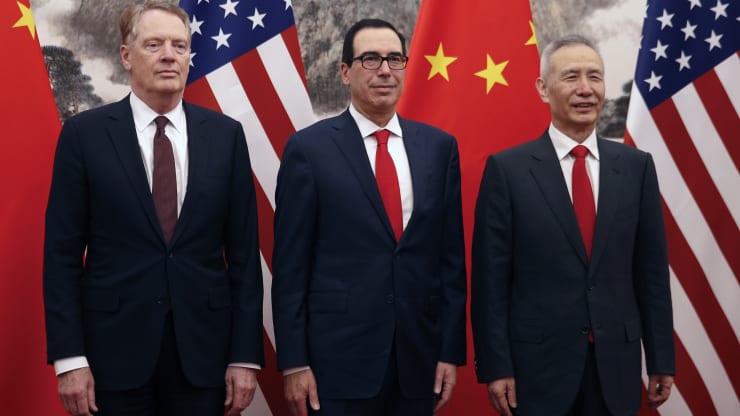 Quick Take: What Should be in a Phase Two China Trade Deal?

The phase one trade deal will be signed on January 15, and consideration is being given to what a phase two negotiation should include. Here's our take on what could and should be in the second round.

• Vice Premier Liu He coming to the United States to sign the phase one trade deal on January 15.

• President Trump says phase two negotiations will begin immediately; different view from President Xi who promotes focusing on the implementation of phase one.

• Phase two should address more of the systemic issues to better rebalance the bilateral trade relationship over time.

• Phase two could take several different iterations: incremental agreements on discrete issues, finishing of remaining text previously negotiated but not completed from the past year, or a new agreement.

Supporters of increasing trade between the United States and China will breathe a sigh of relief on January 15 when the trade agreement is finally signed. Relations are frequently unpredictable between the two countries so any unforeseen event could delay progress – as what happened with Chile's cancelation of the November APEC meetings where both Presidents were expected to sign the agreement.

While there has been a lot of criticism for the fact that the phase one deal did not go far enough, it is the first U.S. bilateral agreement with China since its accession to the World Trade Organization in 2001. It does create a foundation to build upon as well as gives the Administration a framework for enforcement.

President Trump has said publicly via Twitter and privately that he expects negotiations to start immediately on phase two. President Xi has been more circumspect. In a meeting with business leaders at the Bloomberg New Economy Forum last November, his focus was on the implementation of the initial agreement. This line has also been echoed by Vice Premier Liu He and the Chinese Ambassador to the United States.

Practically, it is hard to believe that another phase one type of agreement can be negotiated in the time between now and the Presidential election. While both sides agree that there are still issues to be addressed, a certain amount of negotiation "fatigue" has set in.

Vice Premier Liu He, for one, has growing demands on his time given the slowing Chinese domestic economy. Liu is responsible for implementing many of the top economic priorities coming out of the important Central Economic Work Conference that took place in December. State-owned enterprise reform, reduction of financial risk, upgrading financial oversight, including energizing the financial super-regulator, overseeing the transition to more foreign financial firms entering the market, and, of course, creating the enforcement structure to ensure that phase one commitments are implemented – to name just a few of the items on his to-do list.

In the United States, the Presidential race will begin in earnest this spring which makes it tough to accomplish a major trade deal with China, which is always controversial. That said, with the impeachment trial looming in the Senate, President Trump might be actively seeking positive headlines. It would not be a surprise to see a series of small victories concluded with China on discrete issues that can be announced in 2020. In December, Treasury Secretary Steven Mnuchin said, "Phase two may be 2a, 2b, 2c, we'll see, but this is unto itself a huge accomplishment for the president." These small victories could include: strengthening digital copyrights, particularly for sporting events; neutralizing the politicization of China's anti-trust review process; addressing film quotas; and, liberalizing the cloud computing market.

What Should be in Phase Two?

The details of the phase one agreement will be known after the signing ceremony next Wednesday, but it seems that a number of the systemic issues -- or processes -- remain on the table. Further market access is key to increase U.S. exports, especially in the services sector where the United States is so competitive. It will be critical to ensure that as the market opens, other processes – whether it is the requirement to obtain a business license, conduct a national security review, receive a specific approval – cannot be used to block access. Reform of the state-owned enterprises, approvals for investment and a continuing focus on protecting intellectual property rights are also important.

One of the major sticking points will be how to handle emerging technologies as well as access for existing technology companies. China is highly competitive with the United States in artificial intelligence, quantum computing, new energy vehicles, and data processing. While much of this technology was invented in the United States, it is being commercialized and improved upon in China. Decoupling is not the answer, so another way forward must be sought, such as a new global institution of leading tech countries that develops agreed-upon rules, such as was done for trade issues with the creation of the World Trade Organization in the 1990s.

Other key issues that remain to be addressed include:

• Outlining a National Security Review Process: The process has long been under review in China, and there is some evidence that it is holding up foreign company approvals in different sectors. The National Development and Reform Commission (NDRC) is leading the drafting and has no official timeline for its completion. Ultimately, the process should be transparent with clear deadlines, especially in the acceptance of applications.

• Reforming State-Owned Enterprises: Reforming SOEs is a long time coming. While there is support amongst China's reformers for taking this on, there is the question of how best to transition these behemoths. These firms should operate on commercial terms, especially those in the provinces. Mixed ownership will continue to exist under President Xi, but there are rules in the Organization for Economic Cooperation and Development (OECD) of "competitive neutrality" that China has committed to adhere to but has yet to implement.

• Eliminating Subsidies: Subsidies to SOEs has been a chief complaint of foreign companies seeking a level playing field. China should need to find a way to reduce them, phase them out or declare them in any subsequent agreements

• Forging an Understanding for Tech Competition: Tech competitiveness is going to be an issue of conflict with China for the foreseeable future. The two countries must develop some kind of "rules of the road" for fair competition, protection of national security as well as the ethics around artificial intelligence, to name just a few of the issues.

• Regulating Digital Flows: According to reports, U.S. officials have suggested there will be a focus on digital issues in phase two. Digital trade, data localization, cross-border data flows, and cybersecurity could all be discussed. There were efforts in phase one to tackle some of the controversial issues in China's 2016 cybersecurity law, such as the requirement to store data in China and use their network equipment.

While there is no doubt that the road to phase two will be bumpy and much more challenging, the real test will be whether the Chinese side can ensure strong enforcement of the phase one agreement. That enforcement will be essential to the success of any subsequent negotiations.