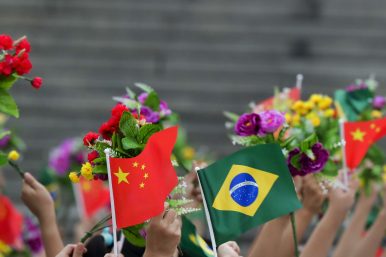 The Diplomat: How Latin America Factors Into the US-China Rivalry

The U.S.-China relationship is on a new trajectory that has profound implications for other regions. Even with a resolution to the trade war possibly on the horizon, this bilateral relationship is now confronting a systemic clash that – at its heart – centers around the race to commercialize transformative technologies like artificial intelligence, the Internet of Things, and self-driving vehicles. This clash will play out not just between the United States and China, but around the world, pressuring countries and leading tech companies to choose a side.

One such region is right in the United States’ backyard: Latin America and the Caribbean. As the political atmosphere in the U.S. grows more foreboding for Chinese companies, the country’s tech giants and start-ups are focusing on the booming Latin American region.

Latin America is already China’s second-largest destination for foreign investment, with $25 billion in FDI in 2017, up from just $2 billion in 2004. Likewise, China-Latin America trade has multiplied 18 times since 2000. President Xi Jinping has also extended his signature foreign policy, the Belt and Road Initiative, to Latin America, signing up 14 of the region’s 20 countries. Xi has been to the region four times, with plans for another visit this November for the BRICS Summit in Brasilia, where the new government has been less receptive to Chinese charm.

Chinese investment in this region has come under much international scrutiny, however, with questions around resource extraction and unsustainable lending. For example, Ecuador is committed to shipping 90 percent of its exportable crude to China through 2024, as part of a deal to secure Chinese investment. Venezuela is paying back most of its substantial Chinese debt through oil shipments, with 330,000 barrels per day going to China in 2017.

On the foreign policy front, the battle for recognition between Taiwan and China has once again heated up. Recognition of Taiwan as an independent political entity has been a flashpoint issue since Taiwan lost its seat in the United Nations in 1971. Its allies in Latin America have begun to dwindle. Panama, the Dominican Republic, and El Salvador have shifted from Taiwan to China since 2017. In return they have secured infrastructure financing and investment, and have committed to awarding contracts to Chinese companies. These actions have drawn the ire of some in the U.S. Senate, including Senator Marco Rubio, who has warned other countries, like Haiti, about “not making the same mistake the Dominican Republic did.”

These concerns notwithstanding, China has been making significant moves into the tech space. Latin America is an attractive market with a receptive user base and fewer political headwinds. The region has more than 200 million smartphone users, and is the second-fastest growing mobile market in the world, behind sub-Saharan Africa. Mobile technology accounts for 5 percent of the region’s GDP and generated $280 billion in economic value last year.

It is in this space that the U.S.-China systemic clash could play out. As the world prepares for the 5G revolution, Chinese technology provides an attractive option to cash-strapped developing countries seeking to upgrade their infrastructure. Chinese tech may even have a leg up, in that their products are more compatible with the level of development in the region. But the Trump administration is actively campaigning against countries using certain Chinese technology, forcing them to choose between U.S. or Chinese systems.

In the most headline-grabbing tech battle, the U.S.-led international efforts to ban Huawei from the build-out of the global 5G infrastructure, some Latin American governments have been less susceptible to U.S. pressure. On a recent Sinica podcast, a former Mexican ambassador to China, Jorge Guajardo said, “During all administrations prior to President Trump’s, there was sort of an unwritten rule with Mexico that Mexico would do all that was possible to block Huawei from building its telecommunications infrastructure. That changed with President Trump.” Mexico is now working with Huawei to build out its telecom system. By contrast, Canada has cooperated with the United States to arrest a senior Huawei executive, and daughter of the company’s founder, Meng Wanzhou, on allegations of bank fraud.

This presents a serious dilemma for U.S. policymakers. China’s Belt and Road is not so distant when it extends beyond the ancient Silk Road to Latin America. China’s deep pockets are alluring, and they are holding out their economic model as an alternative — with a notable track-record — to developing countries looking to replicate China’s economic miracle. That model is based on an economic system that differs from and clashes with that of the United States. After the Trump administration called for cuts in foreign aid to Latin America and the Caribbean of over 30 percent, and the rollout of tough new immigration policies largely aimed at the Latin world, Washington will need to find a way to remain competitive in this pivotal region.

Leigh Wedell is the Chief Operating Officer of Basilinna, a strategic advisory firm focused on the China, Middle East and the U.S.