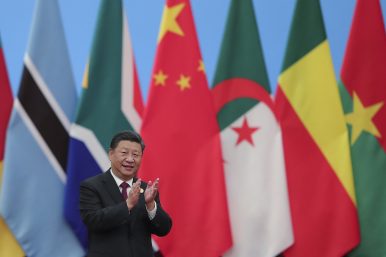 The Diplomat: How the US-China Tech Wars Will Impact the Developing World

In a recent speech, former U.S. Treasury Secretary Hank Paulson raised the specter of an “economic iron curtain,” as trade differences between the United States and China may force countries to choose a side, especially for the adoption of technology. Technology is a key underlying issue as the two countries fight for dominance in new economic frontiers such as artificial intelligence, self-driving cars and big data. It is in this sector where the biggest fault lines in the U.S.-China bilateral relationship are starting to appear.

Yet this iron curtain will not initially fall across the developed technology markets of the United States and Europe, but in the third-world markets such as the Middle East and Africa, where huge demand exists and where Chinese technology is affordably priced and easily adopted. And where Chinese lending to purchase these technologies is rising, while U.S. financial aid to the region is shrinking.

Chinese technologies already face significant obstacles in the more developed markets of the United States and Europe. Not only is the competition more challenging from the entrenched major tech companies such as Facebook, Google, IBM, and Microsoft, but the changing political sentiments toward China make it more complicated to gain a foothold in the market. Indeed, many in the United States believe that Chinese tech companies have risen on the shoulders of stolen U.S. technology, and therefore seek to limit the use of their products globally.

China’s cutting-edge technologies are also more applicable in third world markets. Financial technology, or “fintech,” is a prime example. Only 15 percent of Egypt’s 100 million people have a bank account, yet there is 110 percent mobile phone density. China’s leading fintech firms offer the means to bring millions into the financial system and provide instant loans to spur small businesses and drive growth.

It is therefore no surprise that the Chinese leadership is actively courting this part of the world.  President Xi Jinping’s first foreign trip in his second term was to the Middle East and Africa, and last year he hosted the leaders of the Arab League countries, and then those from Africa. At these summits, China pledged economic aid and financing for major infrastructure development, as well as support for these nations’ transitions to more green growth as part of China’s Belt and Road Initiative.

A few of China’s top companies have already been highly successful in the developing world. Huawei, the private telecom equipment manufacturer, is the dominant foreign handset seller in Egypt and other countries in the region, yet is essentially banned in the United States and some other Western markets. The Chinese are building the basic architecture for many of the region’s telecom systems, and as these nations adopt 5G standards, Huawei will help bring the Internet of Things – from driverless cars, facial recognition cameras, and internet-linked refrigerators – to the Middle East and Africa.

As these countries increasingly source their technology and products from China, however, it is setting up an inevitable conflict with the West.

In our increasingly interlinked global economies, technology choice is a central issue. Already, the U.S. government is carefully reviewing the use of any Chinese technology in our telecom infrastructure, as well as Chinese investments in key strategic industries. And there are those in the administration and on Capitol Hill who are concerned about any links at all with Chinese technology – even outside U.S. borders.

There are growing calls to examine whether foreign banking networks should be allowed to connect with that of the United States if they are using Chinese technology. With the adoption of 5G standards bringing the internet more fully into all aspects of modern life, fears of Chinese spying will only increase.

As more Chinese companies fall under suspicion in the United States and turn to opportunities in less-developed markets, Washington – and its allies – may force countries to choose between American or Chinese models of internet governance. The end result would be a divided internet along political or economic lines. A ban of Chinese technology being used in U.S. infrastructure networks would be a bombshell – especially if the United States actively lobbies against all Chinese technology, as it is has done in the case of Huawei.

As Paulson warned, the global economy faces a real prospect of an economic iron curtain descending across the developed and developing world. This could have significant ramifications for the United States if it forces its traditional political allies in the Middle East such as Egypt, Saudi Arabia, or the UAE to choose between the United States and China.

Now is the time to develop policies – based on a mix of increased competitiveness in the United States, financial support for American companies overseas, and rational policymaking in Washington regarding the China threat – to avoid a balkanization of the internet, and potentially the trading world.