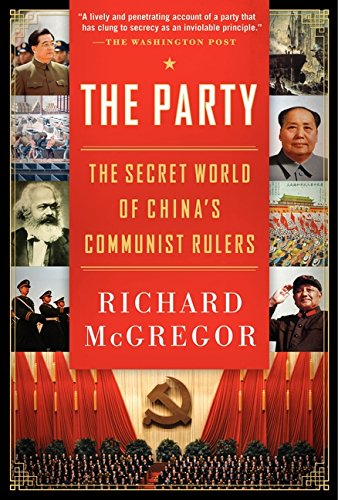 At a time when the Chinese Communist Party (CCP) is frequently in the news, we recommend reading Richard McGregor's authoritative book, “The Party: The Secret World of China’s Communist Rulers.” Written in 2011, McGregor, a former China based writer for the Financial Times, reveals the wide role of the Communist Party in aspects of Chinese life and society.

Through interviews, first person accounts, and anecdotal insights, McGregor is able to pull away some of the veils that have allowed only glimpses into the workings of the Chinese Communist Party for decades. "The Party" depicts the tight grip that the CCP has on the China, noting that, despite its reforms, it has overwhelming power over the state, personnel, propaganda, and the People's Liberation Army. His argument throughout is consistently tied back to the idea that, pull back the curtains, and the Chinese system is still Communist in ideology. From the "red machine" to the overwhelming power the Party posses, McGregor insists that Lenin himself would recognize the system for one he pioneered.

The book's use of diagrams, such as the illustration of the Party hierarchy, and images of the personnel that McGreggor refers to throughout the book, enables a clear picture of China’s inner sanctum to be painted in a way that even those with limited understanding of the topic can grasp.  McGregor inclusion of his few visual assets helps ensure that his readers are able to reference the structure in place or the leaders being depicted in order to fully grasp what might otherwise be more challenging concepts.

Though it is clear there have been some changes since the time of Hu Jintao's Presidency, such as a reduction in Politburo Standing Committee members from nine to seven or an increase in Leading Groups, for example, the overall messaging of this book still rings true: the CCP is a deeply complex and powerful mechanism whose influence is extended across all aspects of Chinese politics, culture, military, and life.

“The Party: The Secret World of China’s Communist Rulers” remains one of the best-- if not the best-- accounts of the inner-workings of the Chinese Communist Party. Given role that the Party will continue to play under President Xi Jinping, this book on the Communist Party should be on the reading list of anyone interested in better understanding China's future development.