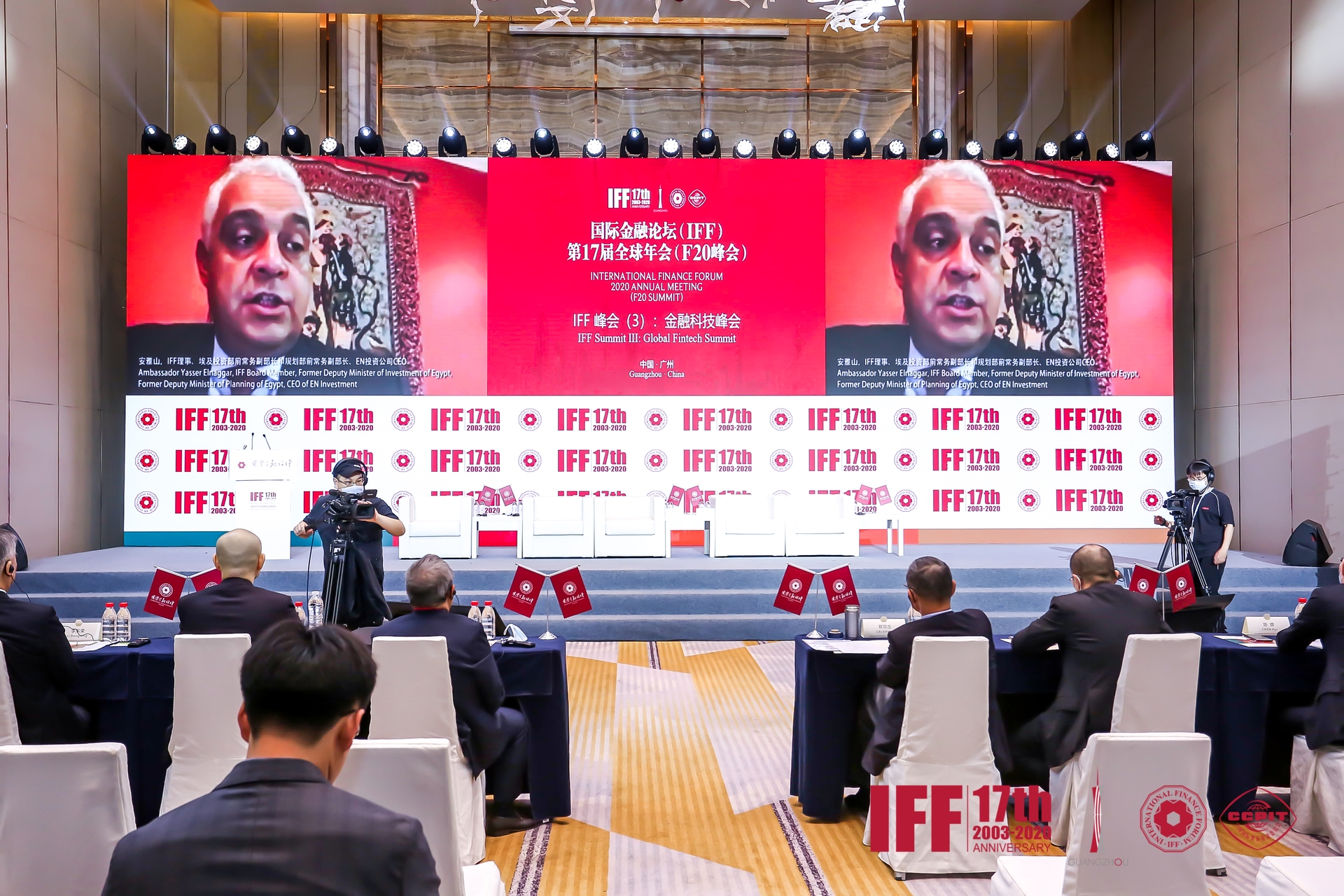 At China’s International Finance Forum 2020, comprised of leading financial influencers including former bank governors and heads of state from China, Australia, New Zealand, Turkey, Pakistan and more, board member, Egyptian Ambassador Yasser Elnaggar discussed the potential for the development of fintech in the Middle East and North Africa (MENA) region.

The past year has seen significant changes and suffering in the world, with the global pandemic creating many challenges – health, economic, and social and there are many unknowns ahead. Fortunately, there are glimmers of hope with the launch of several vaccinations for COVID. Also, a new President in the United States is expected to bring some more consistency and civility to global relations. Also, countries are starting to show signs of economic recovery even in light of a second – or third rise of the virus.

In Egypt, it is one of the few – if not the only – emerging markets that will have positive economic growth this year. This is due, in part, to some reforms that the government made to stimulate the economy through tax policy and other fiscal measures, attempting to streamline market entry for foreign firms, and creating incentives for technology startups. It remains, however, a cash-based region, and one with great economic disparity.

Recent data, for example, shows that 67 percent of MENA residents actually do NOT have a bank account – compared to 65 percent of Europeans who DO have one. Yet at the same time, Egypt is a well-wired society. Over half of the MENA region have mobile penetration rates at 70 percent or higher, it is the second-highest penetration rate in the world. In Egypt, the penetration rate is over 100 percent.

When COVID hit in the Middle East, the setting was ripe for technology to be a big winner. And out of that, fintech is by far the biggest leader. And there is much that we can learn from the Chinese experience in the field.  It is expected that the MENA region will experience some of the greatest growth for the adoption of payment systems, e-commerce, and other forms of fintech.

The MENA region has a tech-savvy, youthful population. There is a population of over 450 million people, with about half of them being younger than 25 years of age. And given the challenges of entering the traditional job market, now exacerbated by COVID, the startup community is thriving in the region. It provides opportunities as well for those parts of the population like women and other minorities, who also might find it hard to enter the traditional workforce.

There are a few trends that are apparent in the market in the Middle East and North Africa. The first important step is the development of the regulatory structure. To be adopted successfully, the regulators need to create the legal structure, including how banks will operate and interact with the technology firms. The major central banks in the region have taken this development seriously. After some study –may be too long in Egypt – they have been issuing policy announcements.

In the UAE, the central bank has established a dedicated fintech office to develop national regulations for financial technology firms, recognizing the sector isa key growth area for the country.

In Saudi Arabia, beginning in 2018, the Saudi Arabian Monetary Authority (SAMA)launched a regulatory sandbox called Fintech Saudi to allow local and international fintech firms to test digital products that would later release publicly; since its launch, it has received 250 applications, accepted 40, and graduated 14. As a result, Saudi Arabia has been able to test e-wallets, P2Ptransfers, digital lending, and direct international transfers. In addition, both the UAE and Saudi are exploring the establishment of a digital currency –something that China's central bank has already piloted.

In Egypt, beginning in 2019, the Central Bank of Egypt‘s (CBE) fintech strategy is based on the integration between Egypt's Vision 2030 and the CBE's vision to meet the needs and aspirations of the Egyptian market. The strategy also aims to turn Egypt into a leading center for fintech in Africa and the Arab world.

In terms of digital backbone, Chinese companies like Huawei have been active in creating the necessary technological backbone for supporting these new innovative technologies. The region has been installing bay stations for the launch of 5G. 5G is expected to reach 80 million subscriptions in the MENA region by 2025, representing 10 percent of total mobile subscriptions.

Support for Startups and IPOs

There has also been growing support for startups and IPOs in the Middle East. While currently representing only 1 percent of global fintech investment, the fintech sector across the Middle East is growing at a compounded annual growth rate(CAGR) of 30 percent.

However, by 2022, estimates predict 465 fintech companies in the Middle East will raise over $2 billion in venture capital funding, compared to the 30 fintech companies that raised just $80 million in 2017. The commensurate rise in incubators and accelerators work to support the growing startup sector.

Also, the rising number of fintech and technology funds include sovereign wealth funds, along with financial institutions starting funds, exemplified by CBE's$57 million fintech fund. In addition, the UAE's Dubai International Finance Center launched the "Fintech Hive" with $100 million. Recent IPOs are encouraging to those in the field, exhibited by Fawry, a digital payments system in Egypt, which had a successful IPO last year with the initial public offering being oversubscribed by 30.3 times. This is an inspiring sign for the industry.

The region has also been able to leapfrog technologies that don't have the same "built" infrastructure as the United States and the European Union. For example, the rapid adoption of e-commerce. MENA’s e-commerce sales are expected to jump to $48.6 billion in 2022, up from $26.9 billion in 2018. COVID has further accelerated a trend towards greater adoption of online services. It is important to note that the governments were already in the process of seeking to digitize services ranging from remittances, bill payments to loans, medical services, and information.

The technology sector will remain one of the fastest-growing for the region and provides great opportunities for partnerships with Chinese firms, who are developing cutting edge technologies and applications. Some areas of potential cooperation could include payment systems like mobile wallets, online insurance, e-commerce, and e-medical services. Also noteworthy is the potential use of fintech to promote sustainable habits, another priority sector for the governments in the Middle East and North Africa.

Even though it is starting from a low base, the MENA region is one of the fastest-growing for technology start-ups, especially fintech. The conditions are ideal – a large unbanked population, cash-based economies, but a highly wired population. The central banks are developing finreg environments to provide the legal framework for the sector and, combined, with growing support from tech funds and entrepreneurial incubators, the field is ripe for success in the region.