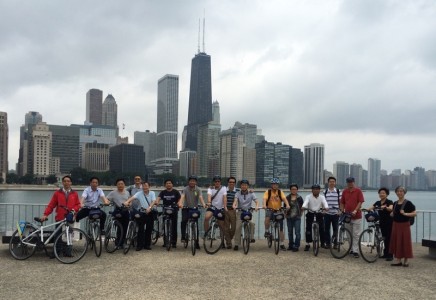 This article is cross-posted from the Paulson Institute. Read the original article here.

Imagine relocating four of America’s top five city populations – Los Angeles, Chicago, Houston, and Philadelphia – into new cities every year. That is what Chinese urbanization will look like. China is planning to move more than 100 million people from the countryside into cities by 2020—the largest mass migration in human history. China is investing $6.8 trillion into executing this ambitious plan to reinvigorate its economy.

China’s mayors are the operatives in this economic – and environmental – mission. And this week, 12 mayors from China’s fastest growing cities begin a two-week sustainable development training program in Chicago and Miami, run by the Paulson Institute and the University of Chicago. The intent is to equip these mayors on the front line of urbanization with the tools necessary to introduce sustainable practices for air, water, transportation, energy, construction and more into their cities based on the best of U.S. practices.

What these Chinese mayors learn in the University of Chicago’s classrooms and beyond will influence the global economy and the environment in big and small ways. Last year, a simple bike ride on a beautiful day around Lake Michigan inspired one Beijing district mayor to redesign his district’s urban plan to create a similar path along the river.

Chinese mayors are implementing China’s plan to shift from manufacturing low-end products for export to a consumer-driven growth model. They will oversee the construction of smart grids, upgrade water and sewage networks, retrofit buildings, and revamp transportation systems.

The challenges of this mass urbanization are mind-boggling. China needs to create an estimated 110 million jobs annually, set up a viable social safety net for 100 million currently uninsured migrant workers, and build an urban infrastructure for hundreds of millions of new residents. Even more pressing is the need to tackle these challenges in an environmentally sane manner, to avoid further polluting one of the world’s top energy-consuming countries.

Our Chinese visitors stand to gain a lot from their U.S. counterparts. And there is much to be gained on the US side, too: China’s urbanization plans offer significant business opportunities for American companies. The training programs the Paulson Institute and the University of Chicago have developed are models that other major U.S. cities can follow. Going forward, US mayors should ramp up their efforts to engage their Chinese counterparts in order to position their cities to benefit from this massive initiative and help shape the outcomes. Without judicious input and planning, China’s rapid urbanization could make “airpocalyse” its next big export.

IRI Statement on the Passing of Lorne Craner

Why China’s Carbon Market is Failing to Take off