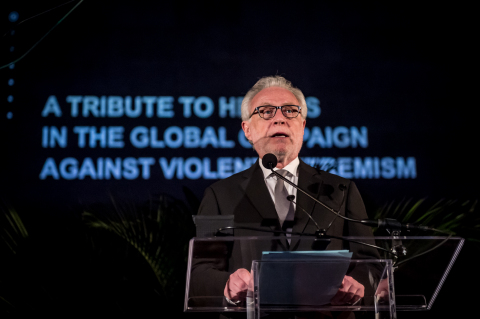 This article is cross-posted from Business Wire. Read the original article here.

NEW YORK--(BUSINESS WIRE)--A Tribute Ceremony to honor ten individuals and groups for their extraordinary contributions to the global campaign against violent extremism was held last night, September 22, at The Metropolitan Museum of Art.

The event, emceed by CNN’s Wolf Blitzer, and co-hosted by a group of seven women leaders, including Sara Bloomfield, Director of the U.S. Holocaust Memorial Museum; Irina Bokova, Director General of The United Nations Educational, Scientific and Cultural Organization (UNESCO); Ambassador Esther Coopersmith, UNESCO Goodwill Ambassador; Meera Ghandi, Founder and CEO, The Giving Back Foundation; Francine LeFrak of the Harvard Women’s Leadership Board; Deborah Lehr, Chairman and Co-founder of The Antiquities Coalition, and Catherine Reynolds, Founder and CEO of the Catherine B. Reynolds Foundation.

The event included a posthumous tribute to Elie Wiesel by Ambassador Ronald Lauder in the presence of Marion Wiesel. Other speakers and dignitaries present included President Plevneliev of Bulgaria; President Nishani of Albania; Daniel H. Weiss, President of The Metropolitan Museum of Art and his predecessor, Emily Rafferty, President Emerita of The Metropolitan Museum of Art; the Archbishop of New York Timothy Dolan; and jazz legend Herbie Hancock.

The important contribution of religious leaders to peace and intercultural harmony was recognized in a tribute to three outstanding leaders: Rabbi Arthur Schneier, Founder and President of the Appeal of Conscience Foundation; Cardinal Pietro Parolin, Secretary of State of the Holy See (represented by Archbishop Bernardito Auza, Permanent Observer of the Holy See to the United Nations); and Dr. Ali Goma’a, Grand Mufti Emeritus of Egypt, whose special envoy Dr. Waleed El-Ansary addressed the gathering on his behalf.

The Heroes whose contribution to the global campaign to prevent and overcome violent extremism was celebrated at this event were:

Abdihafid Yussef Abdi (Kenya), for his courageous and innovative work as a co-founder of Teachers Against Violent Extremism, a network of educators fighting radicalization in Kenya.

Nicholas Kristof (USA), New York Times columnist, for his steady focus on the root causes and cultural and political ramifications of violent extremism.

Turki Al-Dakhil (Saudi Arabia), Director General of Al-Arabiya TV, for his outspoken advocacy of tolerance, freedom of the press, the rights of minorities and women in the Gulf region.

A team of students at the Rochester Institute of Technology (USA), who won the Peer-to-Peer Challenging Extremism Initiative award organized by the State Department, for their innovative approach to countering hate speech on the internet.

Nadia Murad (Iraq), a Yazidi woman who survived the massacre of her family and sexual enslavement by ISIS, for her valorous exposure of atrocities committed by terrorists against her people.

Serge and Beate Klarsfeld (France and Germany), for their lifetime dedication to expose and bring to justice Nazi war criminals, and their tireless efforts to use the lessons of history to denounce racism and bigotry.

Emanuel Jal (South Sudan), musician, actor, former child soldier, and political activist, for his engagement to bring peace and reconciliation to his people through music and art.

Li Yongjun (China), for his innovative leadership in preserving and promoting intangible cultural heritage in China and around the world.

This event was made possible in part through the generous support of the French telecom company Orange and the consumer products company Tylt.

For photos of the event, please see https://www.dropbox.com/sh/tnxmpwrvz7r07d8/AAAYe23r6KqF-TJKigitPNqza?dl=0