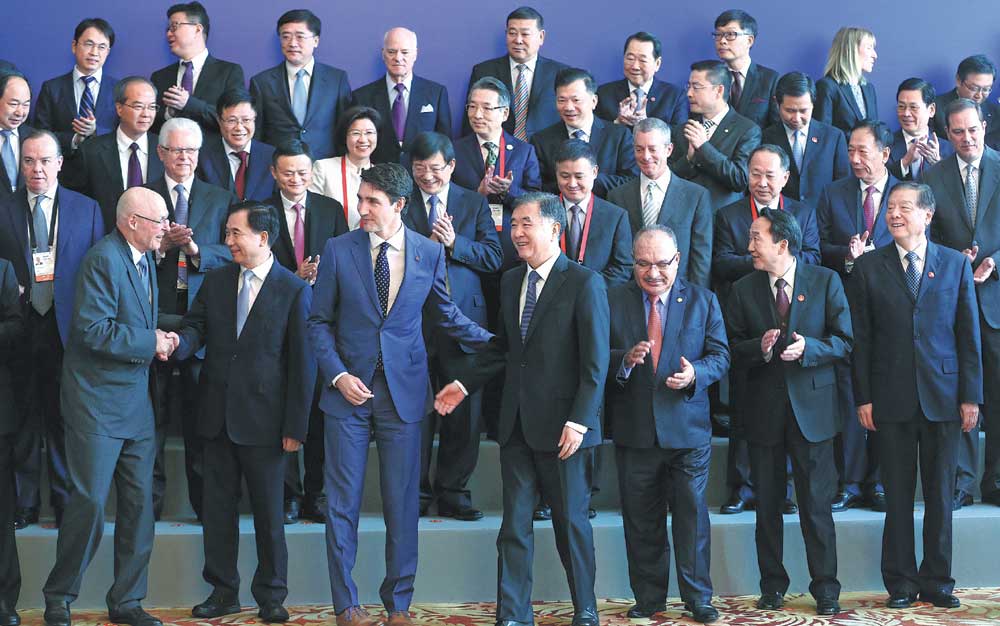 This article is cross-posted from China Daily. View the original article at chinadaily.com.cn

You can also find this article in The Telegraph here.

China will not close its door to the world, and indeed will become increasingly open, such as in business, which will become more transparent and better regulated, President Xi Jinping said.

He made the pledge in a message of congratulations at the start of the Fortune Global Forum in Guangzhou on Dec 6 in which more than 1,100 prominent political, economic and academic figures from around the world took part.

China will continue to forge global partnerships, expand common interests with other countries and further liberalise and facilitate trade and investment, he said.

Mr Xi welcomed global businesses to invest in China to share the opportunities brought by the country’s reform and development. The country will comprehensively deepen its reform, spur innovation in all walks of life and unleash the dynamics of development, Mr Xi said.

China will develop the open economy to a higher level and promote the Belt and Road Initiative, and the country will create more opportunities and make a greater contribution to the world, he said.

Speaking at the opening of the forum, Vice-Premier Wang Yang said China will work on expanding opening-up in some priority areas.

The country will ensure that before foreign investors enter the market they will be treated at least as favourably as domestic investors, there will be a negative list and greatly lowered thresholds will be in place for them to enter the market, Mr Wang said.

A negative list specifies areas in which investment is prohibited; all other areas are presumed open. China will further protect the legal rights and interests of foreign investors and create a business climate that offers treatment based on equal footing and fair competition, Mr Wang said.

The Canadian Prime Minister, Justin Trudeau, said: “When it comes to trade and international co-operation, China and Canada share the belief that more openness and more collaboration is the right way forwards, indeed, the only way forward.”

Papua New Guinea’s Prime Minister, Peter O’Neill, said his country, like others, will benefit from the 21st Century Maritime Silk Road plans, which Mr Xi first proposed in 2013, as it “will connect our businesses more fully with China and the wider global market”.

It “further creates potential for us to develop effective solutions to the real world problems we face today”, he said. Top executives of multinational companies attending the forum expressed optimism regarding China’s rising role as a strong advocate for globalisation and innovation in international trade.

“The Chinese government’s resolve to promote openness and innovation will bring a significant and positive impact to the world economy, and we see great opportunity and a dynamic environment driven by the local excellence in execution in China as the country becomes an increasingly global player.”

Openness and innovation dominated the agenda of the forum from Dec 6 to 8. The concept also coincided with the key messages from the report Mr Xi delivered at the 19th National Congress of the Communist Party of China in October.

The report stressed that openness and innovation are among the keys for China to achieve successful economic transition and sustainable growth.

Frank-Jurgen Richter, founder and chairman of the Swiss think tank Horasis, said that he believed China would lead global innovation with more and more Chinese companies coming to the forefront.

Mr Xi’s congratulatory message indicated China will adhere to its reform and opening up policies to promote globalisation in the years to come, said Andrew Robb, former Australian trade minister.

Borje Ekholm, president and chief executive of the electronics firm Ericsson, said: “We are happy to see the ambition of China to strengthen global partnership through further opening-up and innovation.

“As a world leader in communications technology and services, Ericsson is looking forward to discussing with the Chinese government and business leaders on how mobility can enable everyone, every business, and every industry.”

China has an intersection of craftsmanship and computer science, rarely found in other places. Many companies see China as a big market, but for us the main attraction is the quality of people. We have now about 2 million application developers in China [on Apple’s App Store]. They are inspiring entrepreneurs, whose products are sold not only here but abroad. China is already incredibly innovative in so many areas. There are apps and business models that could only have been created here. I went to a bike-sharing company the last time when I was in Beijing. That idea can be used in many countries around the world. But arguably, it can only be created here.

Deborah Lehr, chief executive and founding partner of Basilinna, a strategic business consulting firm in the US, and vice-chairwoman of The Paulson Institute

I think it is a very exciting opportunity for companies to expand and grow in China. My company is relatively small in China. But the new policies, including the Belt and Road Initiative, and the continuous transformation of the Chinese economy present great opportunities for companies like us to participate in the growth, and the opportunities will be great in the future. China is hugely important to the global economy, in terms of domestic growth and also the way China wants to participate more internationally and share its growth with other countries around the world. Both domestically and around the world, I think the future is very exciting. It is great to be part of it.